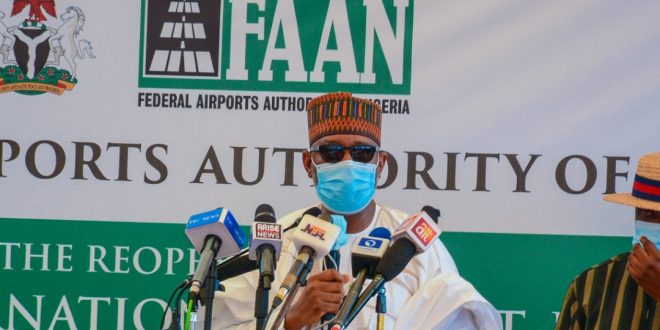 Minister of Aviation, Hadi Sirika at the reopening of the Enugu Airport

MINISTER of Aviation, Senator Hadi Sirika says he has approved N1billion to fast track the completion of the Akanu Ibiam International Airport (AIIA) Enugu terminal building being built by CCECC, a Chinese firm.

This is just as he has reassured the Enugu state governor and other south eastern governors that the federal government would finish the cargo terminal at the Enugu Airport to ensure commercial activities in the south east are lifted.

Sirika made this known at the reopening of the Enugu Airport which was shit down August 24th, 2019 to rehabilitate the bad airport runway and upgrade it along with the taxiway and improve other facilities at the airport.

According to the Minister who represented President Muhammadu Buhari, the airport is going to be made one of, if not the best in the country.

Sirika said: “I want to assure your excellencies that having delivered this project on time and on budget, the nest focus is to deliver the cargo terminal, the international terminal building and many more.

“As a matter of fact, yesterday Saturday before I left my office, I had approved and released the sum of N1billion to continue works in the international terminal.”

“The commissioning is not without challenges, some of the challenges include lack of bitumen, lack of fairy dust which we had to go to Kogi State to get, the rains the covid-19 lockdown and something very unique that happened during the lock down.

“There was a change of hands in the company that was doing the job PW. and we had to make sure that the work does not stop.”

Nigerianflightdeck is an online news and magazine platform reporting business stories with a bias for aviation and travel. It is borne out of the intention to inform, educate as well as alter perceptions with balanced reportage.
Previous S’ East Governors, bigwigs hail President Buhari as Enugu Airport reopens
Next UBA Foundation calls for entries for 10th NEC edition, increases prize money by over 33%