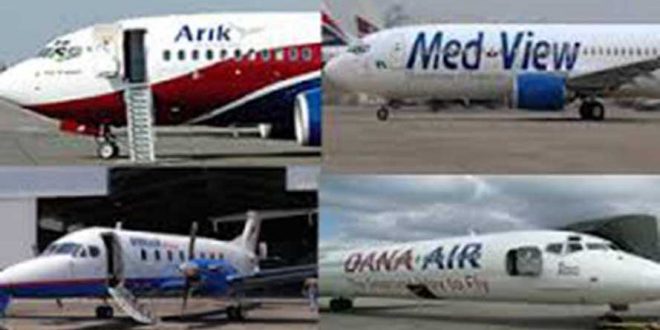 MED-VIEW Airlines, ARIK Air and South African Airways are some airlines that have offered partnership to the League of Airport and Aviation Correspondents (LAAC) as its 22nd annual seminar and gala night of the draws closer.

Others include Air Peace, Dana Air Ethiopian Airlines and Rwandair.

More airlines, agencies and organisations have thrown their weight behind the League in order to ensure a successful outing of this year’s event and so far, no fewer than seven airlines, both local and international have supported the league in different forms.

Others are gearing to make firm commitment to the seminar, which has attracted high level industry speakers from both within and in the Disapora.

Alhaji Muneer Bankole, the Chairman and Managing Director of Med-View Airline in an interaction LAAC in Lagos, said that members of the league have been able to put the government on its toes through objective and analytical writings while the policies of the government for the industry are reviewed by reporters on the beat.

Bankole noted that reporters on the beat had over the years contributed their quota immensely to the development of the industry, promising that the airline would continue to partner with the league in all its programmes.

He said: “LAAC over the years has been our partner in progress. Members of the league have been tremendously useful to the growth of the airline and the industry at large. Without you doing the informative reporting, the industry won’t be where it is today even though; we know there are still a lot needed to be done.”

According to him, the relationship between the airlines and journalists covering the sector has always been symbiotic over the years.

On his part, Mr. Chris Iwarah, the spokesman for Air Peace, lauded the committee and members of the league for the initiative.

Iwarah explained that the selection of its Chairman, Mr. Allen Onyema as the Chairman of the day further showed the seriousness attached to the seminar by the league.

He declared that Air Peace would continue to collaborate with the league for the development of the aviation industry in general, noting that without the media, the sector would not have attained the current growth and status.

“At Air Peace, we believe that the media, which seek to inform the public about activities in the sector, must also be well-informed to impart the society. This can only be achieved when you organise these kinds of events where players in the global aviation industry are present.”

Also, Mr. Adebanji Ola, the spokesman for Arik Air, observed that the airline had over the years partnered the league’s activities and would continue to do so.

Ola declared that past seminars organised by the league had been fruitful and rewarding to the carrier, adding that its management would always partner LAAC’s activities.

“We’ve always been your partner and this year’s edition will not be an exemption. The industry in general have benefitted hugely from your contributions to the developments in the sector. With this seminar, we at Arik Air believe the nation at large would learn some new things especially with the calibre of speakers you are bringing for the programme.”

Mr. Kingsley Ezenwa of Dana Air, also commended the entire league for its vision for the industry.

He expressed that since Dana Air started operation, it has been taking part in the activities of LAAC, assuring that it would continue to associate with the League in numerous ways in the fruitful relationship between the airline and journalists.

Besides, Ethiopian Airlines in its statement expressed delight with the performance of journalists on the aviation beat in Nigeria.

Mrs. Firiehiwot Mekonnen, the General Manager, Nigeria, Ethiopian Airlines while hosting members of the committee in her office in Lagos recently, explained that Nigeria had the most vibrant aviation journalists on the continent and probably in the world.

Mekonnen promised that the airline with 100 aircraft in its fleet would partner more effectively with the league at its 23rd seminar scheduled for 2019, stressing that through such developmental initiatives, more people are enlightened and better informed about the happenings in the sector.

On its part, South African Airways said such seminars organised by journalists on the beat would go a long way to propel the sector forward.

The airline through its media consultant in Nigeria urged all stakeholders and players in the sector to support such noble programmes, which would further improve the knowledge base of participants.

The annual seminar and gala night is scheduled to hold at Sheraton hotels, Lagos with the like of Mr. Nick Fadugba, Dr. Harold Demuren, Mr. Babatunde Irukera and Mr. Ayo Obilana delivering different papers while the Minister of State for Aviation, Sen. Hadi Sirika would be the guest of honour.

Nigerianflightdeck is an online news and magazine platform reporting business stories with a bias for aviation and travel. It is borne out of the intention to inform, educate as well as alter perceptions with balanced reportage.
Previous NCAA reaffirms sanctity of released figures advises stakeholders to refrain from cheap blackmail
Next Camair-Co returns to Lagos-Doula route