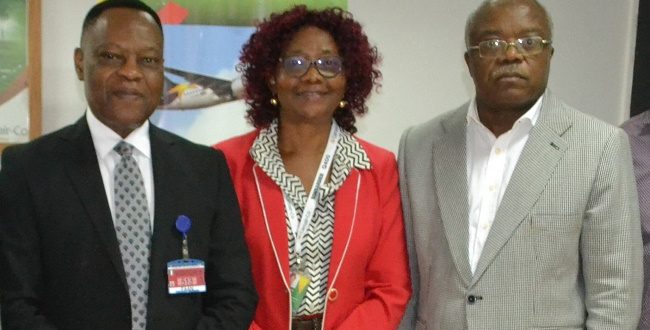 CAMEROON Airlines Corporation (Camair-Co) has resumed flight to Lagos, Nigeria, starting recently on 23rd June this year when the Cameroonian flag carrier arrived from Douala after some years of absence from the route.

At the welcoming ceremony at the Murtala Mohammed International Airport, The Consul General of Cameroon in Lagos, Dr Ekorong A. Dong expressed delight to see Camair-Co back to the economic route of Douala-Lagos, “Today we are witnessing together a new benchmark, a new landmark between Nigeria and Cameroon.”

The Consul General added that the presence of Camair-Co in Nigeria would further enhance the relationship between the two countries, “this will boost the trade, commercial and social-cultural events between our countries.”

“Let me state here that Camair-Co is finally here to stay and provide quality air travel between Nigeria and Cameroon. We appreciate the efforts of APG Nigeria, our General Sales Agent (GSA) for their continuous support in making this relaunch of the Lagos-Doula route a reality,” Agnes emphasised.

According to APG Nigeria General Manager, Camair-Co GSA, Chike Ohiagu said, “the airline is here to stay. We are determined to make sure the airline seats are full and profitable.”

Also speaking at the event, the aircraft pilot, Captain Kono Bihina Constant, mentioned he is delighted to return to Nigeria after a long while. According to the Pilot, “We haven’t flown into Nigeria for a long time. Nigeria is so advance when it comes to aviation, and we are very pleased to be back here. Camair-Co is working so hard round the clock to ensure travellers rely on our airline and not to go elsewhere.”

Camair-Co is scheduled to operate Tuesdays, Thursdays and Saturdays with a Boeing B737 between Douala and Lagos.

Nigerianflightdeck is an online news and magazine platform reporting business stories with a bias for aviation and travel. It is borne out of the intention to inform, educate as well as alter perceptions with balanced reportage.
Previous Med-View, Arik, SAA, others partner LAAC for 22nd Seminar
Next Clearing agents ground activities at Lagos Airport, embarks on indefinite strike