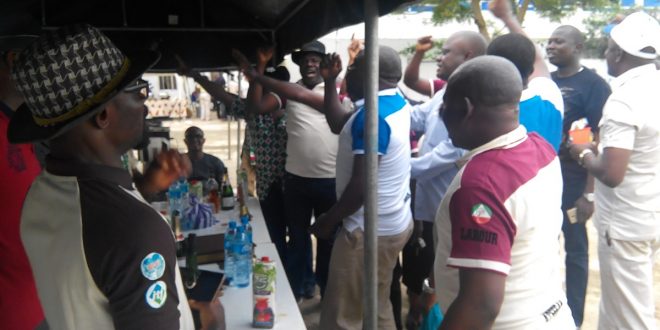 MEMBERS of the Air Transport Services Senior Staff Association of Nigeria (ATSSSAN) during the May 1st Workers’ Day observed that the Nigerian aviation sub-sector is one industry worse hit by the prevailing economic recession ravaging the country.

National President of ATSSSAN, Comrade Ahmadu D. Ilitrus, on behalf of the National Administrative Committee (NAC) made the observation during his May Day speech at the Lagos Airport adding that the situation is made worse by the perennial scarcity and high cost of Jet-A1 and aircraft maintenance parameters.

According to the ATSSSAN leader, the situation is further aggravated by some attendant mismanagement in the sector, including “ungodly interventions of the Asset Management Corporation of Nigeria (AMCON), which prioritizes capitals over labour concerns in some aviation undertakings, one of which is the present precarious situation our members of the Aero Contractors Airlines are being faced with”.

Illitrus, while discussing the theme of this year’s May Day- “Labour Relations in Economic Recession: An Appraisal”, further pointed out that the unexplainable anti-labour posture of denying workers the right to unionism by some private undertakings like; Dana Air; Medview Air; Bi-Courtney; Execujet and Arik Air, contrary to section 40 of the Constitution of the Federal Republic of Nigeria as amended and other extant labour laws are also part of the problems of the sector.

The ATSSSAN leader further said that unconscionable and perpetual casualization of aviation workers in the guise of out-sourcing, contract staffing by some mean corporate organizations in the industry are part of the problems

“Unsavory government policies which unduly interfere in the administration of the agencies in the aviation sectors such as the career invasion through imposition of managers from outside by the ministry to the detriment of the principle of career progression de-motivates and tend to dampen the morale of the toiling personnel are also part of it”, Illitus said.

He further stated that the determination of the Federal government to concession our four viable airports is not only a security risk to the nation but also an economic terrorism, adding that “ATSSSAN will maintains it no to concession which does no good to our members in particular, and the nation in general”.

“In the context of the theme for this year May Day celebration – Labour Relations in Economic Recession: An Appraisal, it is worrisome to surmise that workers in the aviation industry, who are facing the challenges of having to manage with excruciating working conditions, inadequate operational tools, promotions, salaries, allowances stagnation and incessant redundancy, especially in the private organizations, are not even appreciated by their bosses.

ATSSSAN therefore, stated that the Union is ever determined to continue to find solace in the spirit of their moto: “Dignity and Safety” as regard their engagements with employers of the members.

Illitrus equally used the opportunity to appeal to their friends, brothers and sisters who are yet to subscribe to unionism to consider joining and belonging to the family of ATSSSAN and other responsible aviation unions across the country.

“Today therefore serves as another opportunity to meet with other brothers and sisters from our units, branches and other Unions; rub minds together and activate strategies of emancipating our people from the shackles of oppression, deprivation, want, poverty and sundry socio-economic vices they have been exposed to in a land that is flowing with milk and honey,” ATSSSAN boss said.

Nigerianflightdeck is an online news and magazine platform reporting business stories with a bias for aviation and travel. It is borne out of the intention to inform, educate as well as alter perceptions with balanced reportage.
Previous NCAA conducts substance test on 87 aviation personnel, suspends one for culpability
Next Air Peace joins league of IOSA certified airlines