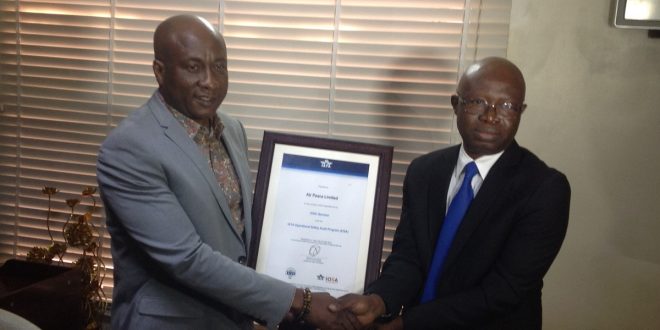 DOMESTIC carrier Air Peace was today presented with the International Air Transport Association Operational Safety Audit (IOSA) certificate showing the airline’s compliance to the highest levels of safety and putting it at par with carriers worldwide.

The IOSA Certificate was presented to the Chairman, Chief Executive of the airline, Barrister Allen Onyema and his staff at the company’s headquarters in Lagos where the two- year certification was handed to the airline.

Air Peace achieved the IOSA certification in just two and a half years after it commenced operations, achieving the feat in record time.

IATA Area Manager West Africa, Dr. Samason Fatokun commended Air Peace for scaling the huddles and achieving the feat adding that the airline could only achieve it with the support of its Chairman as the process was strenuous and difficult.

He said, “Today, we are pleased to present the IOSA certificate to Air Peace, meaning that they have met all the requirements and complied with all safety standards and practices in their operations.”

“It is a very good and big achievement. It takes a very rigorous system to actualize it. It is important to get the certification and it is equally important to stay there (certified). It is valid for two years, make sure you stay there.”

The IATA representative also told the gathering that the IOSA Certification will give the airline backing to have interlines, do business with others as well as show the flying public that it is safe as well as its insurers that it follows the best safety practices.

“Such certification makes all know that the aircraft management and maintenance are safe and gives the passengers more assurance and confidence. Air Peace needs to keep on it because the requirements keep changing. Next Air Peace will move to e- IOSA (enhanced IOSA) where the quality assurance will be monitored on a daily basis.”

In his response, Barrister Allen Onyema thanked the IATA for the certificate and revealed that the airline has started making consultations with some foreign airlines for codeshare arrangement.

“I travelled four days ago because of codeshare. We are not afraid of codeshare with any reputable airline. Most foreign airlines are now eager to do business with us. They want to work with Air Peace.”

Applauding the Federal Government Onyema said,” I thank the government of President Muhammed Buhari for giving us six destinations they gave us and I will not disappoint them. With IOSA, most reputable airlines will be willing to partner with us. We want to serve Nigerians better. We will encourage interlining and codeshare which will be done.”

Nigerianflightdeck is an online news and magazine platform reporting business stories with a bias for aviation and travel. It is borne out of the intention to inform, educate as well as alter perceptions with balanced reportage.
Previous May Day: ATSSSAN blames aviation woes on recession, anti-labour laws
Next CBN expels 16 banks from forex market, mulls sanctions