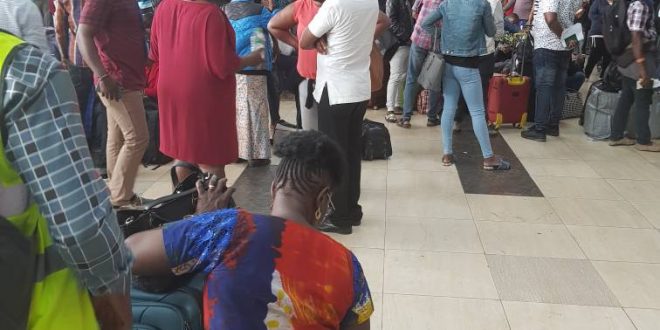 IRATE passengers of Med-view Airlines this morning took over the airlines check-in counter disrupting the airline’s activities over allegations of contractual breach.

The passengers claim they have been stranded due to the airline’s inability to airlift them to their destinations all through the Yuletide.

This morning the aggrieved passengers marched to NCAA Consumer Protection Department desk to complain about the seeming abandonment.

Some of the passengers who spoke to nigerianflightdeck.com claimed they ought to have flown out of the country to their destination, London, since on the 24th of December , Christmas Eve but have been stranded since then without any concrete travel plan from the airline and no plan for restitution.

Dubai passengers too joined the fray as some of them said they had a flight for one of which they could not ascertain whether or not it would fly especially as the were passengers from Monday’s Dubai flight that were equally stranded.

Already the social media is awash with passengers who are be basing the airline services claiming that they have lost one thing or the other due to the ‘unwarranted delay’ of their travel.

The airline on the 24th released a statement blaming their inability to airlift their passengers on adverse weather and technical issues only to be strafed with a barrage of reactions from angry passengers who insist the airline is taking them for a ride.

A passenger who spoke to our reporter said,”I don’t know when the cancelled flight of 24th has been scheduled. I haven’t received any update , no emails, no text messages either, “she lamented. We have not received any updates or confirmation from the company Med-view! Only word of mouth from equally stressed passengers saying there will be a flight but this is not official from med-view and so is uncertain.”

Another passenger said,” This is a joke. I have been waiting from the 25th, customer service said I should come to the airport on the 27th that they have three planes going on that day and to come early but they haven’t sent any confirmation.”

Now worse still, it seems Dubai-bound passengers have been affected as the airline’s Lagos -Dubai flight scheduled to take off by one was yet to board as at 30minutes to the flight time.

Nigerianflightdeck.com observed that the airline’s counters were bare and agitated passengers from a lot of combined flights were eagerly waiting for word on their flights, word according to one of the passengers, that has not come.

She explained that no one was there to talk to them and that all attempts to reach the airline’s official quarters have proved abortive.

As at 12:30pm London bound passengers got reprieve when an airline official appeared with a list for those travelling as they were being endorsed to fly on Ethiopian Airlines, Kenyan Airways and Rwand Air.

Efforts to reach the airline as at the time of publication proved abortive.

Nigerianflightdeck is an online news and magazine platform reporting business stories with a bias for aviation and travel. It is borne out of the intention to inform, educate as well as alter perceptions with balanced reportage.
Previous FAAN dispels stealing allegations, says it’s practically impossible to burgle an aircraft in motion
Next Med-view explains delayed flights out of Gatwick, appeals to passengers