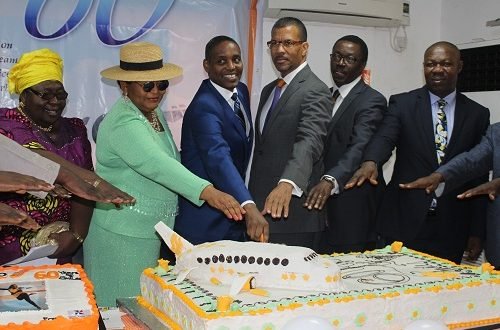 INDUSTRY players, former managing directors and staff paid tribute to Aero Contractors today as the airline clocked a milestone 60 years with a major shareholder of the company Dr. Mrs. Cecilia Ibru hailing the airlines dogged fight back into reckoning.

Managing Director of Aero Contractors, Captain Ado Sanusi who relayed the story of the airline’s journey to where they are presently likened the Aero story to the story of human existence as despite its challenges it was able to come out on top.

He explained that the current management was doing its best to reposition Aero for sustained operations and profitability as Aero has had to make hard choices to surmount some of its challenges.

” it is my sincere pleasure to inform you all that like a Phoenix, Aero has risen from its hard times. Our individual and collective sacrifices, resilience and insistence that this airline is lifted back up is paying off and yielding visible results”

“Right now Aero is improving on its technical services, passenger services and have gone a long way with its numbers as the managing director had said. I want to however congratulate the airline, particularly, it’s junior staff who stayed, most of our smile staff left for other airlines but it is important to note the junior staff who held fast.

“Aero is not a vindictive airline and so when they return, they will come back; we will take them back. Forme, the C-Checks, the passenger increase, increase in fleet size and capacity has shown an increase in trajectory. When we recover we must forgive those who sent us to the pits.

Former Director General of the Nigeria Civil Aviation Authority ( NCAA), Dr. Harold Demuren in his submission said Aero in 60years of carrying millions of passengers has done so with zero accidents and loss of life.

Demuren however sounded caution and advised the airline to make corporate governance their key survival word. He also told the managing director that transparency, accountability must be their watch word.

” 60years of carrying millions of passengers wth zero accidents, if you google Aero, you will see that they have never had any commercial crash with loss of life.

“You(Aero) have developed a cadre of workforce for the aviation industry in 60 years and only Nigeria Airways surpasses you in that regard…You have developed an enviable in-house maintenance Organisation. They are now maintaining the 737 in the country…

On the NCAA’ s report on Aero, Director General of the agency represented by Director of Air Transport Regulation (DATR), Group Captain (Rtd.)Edem Oyo-Ita said it was a positive one for the airline.

” The report is a good one. We have observed present management of Aero in the past few years, and anytime we want airlines to do anything as far as regulation is concerned, Aero is one of the first. From our observations Aero is on the right track and the financial health of Aero is on the green. Salaries are being paid, contractors and other service providers are being paid and so we encourage Aero,” he said.

Nigerianflightdeck is an online news and magazine platform reporting business stories with a bias for aviation and travel. It is borne out of the intention to inform, educate as well as alter perceptions with balanced reportage.
Previous FG inaugurates 10 MW IPP, other critical projects at Abuja Airport
Next Another 131 Nigerians to be deported from Libya today