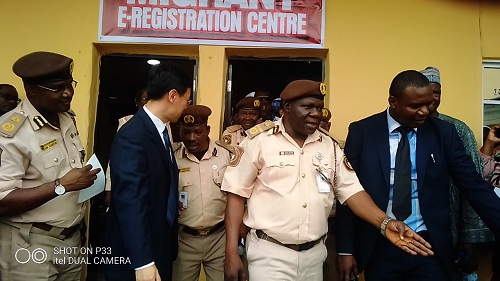 Assistant Comptroller General (ACG) Zone A, Mohammed Alfa with Deputy Envoy of the Chinese Embassy and other dignaitaries as he flagged off the Migrant e-Registration scheme at the Zonal headquarters, Zone A of the Nigerian Immigration Service (NIS), Ikeja Lagos

AFRICAN, Asian, American, South-American and European nationals were on ground at the Zonal headquarters, Zone A of the Nigerian Immigration Service (NIS) where they were sensitized on the new Migrant e-Registration scheme aimed at capturing data of foreign nationals living in the country.

Foreign nationals were advised to make use of the 6-months window given by the Federal Government of Nigeria to register electronically at the state of residence or face sanctions according to Section 57, Sub-section 5 of the Immigration Act.

The Directive was issued by President Muhammad Buhari to commence e-Registration on the 29th of July 2019 and the grace period expires same time in January which spurred the Comptroller General of the NIS, Muhammad Babandede to direct all his Zonal offices to educate stakeholders of the development and midwife a smooth transition into the registration.

Assistant Comptroller General (ACG) Zone A, Mohammed Alfa who played host to over hundred foreign nations from Niger, India, China, Brazil and a whole lot of others explained the processes to the nationals, including who should register, who is exempted as well as how to register.

He told the participants that registration can take place in registration centres of states of residents of foreigners all over the country adding that in Lagos the Registration Centre is at the Zonal Headquarters and the Ikoyi centre to cater for the mainland and the island.

He said,” Any non-citizen of Nigeria who intends to stay in Nigeria for a period exceeding 90 days. If you are a non-Nigerian living in Nigeria and you will not stay beyond three months, you have no business doing the registration, he educated.

“Mr. President, Muhammed Buhari has also granted amnesty to all migrants in the country but he went further to state that any migrant who fails to comply would be declared irregular and sanctioned through the instrumentality of section 57 subsection 5 of the immigration act what this is saying is that you are given six months to go and register.

Explaining further on who should register, he also said that any non-citizen residing in Nigeria who does not intend to stay in the country for a period exceeding 3 months (less than 90 days), has no business going for registration.

On eligibility Alfa quoted the second schedule Regulation 24 sub- section 1 (a) of the Immigration Regulation 2017 stating that the person eligible for biometric registration must have attained the age of 18 years further stating that anyone under the age of 18 is exempted as they are minors, as well as persons who have diplomatic immunity and any foreign national that will not stay in Nigeria exceeding a period of 3 months.

He hinted at benefits of the registration including that it serves as a document of identification when the foreign national is stopped on the road, also he stated that the registration will help enhance security, data collection as well as facility movement of persons and goods.

He added that it was free and fast and required nothing more than 10 minutes to complete the registration process.

Reacting some stakeholders lauded the President for the move and the Comptroller General for enforcing the mandate and pledged their support for the process, “it is good and we stand with Nigerian government for wanting to identify us, secure us and put us in their plans. This is good as I have stayed here for 15 years.

Another stakeholder from Brazil expressed concern that the process may give room for people to provide fabricated document to the service to evade being captured while another said the e-registration may be multiple registration.

In responding, the ACG assured them that the NIS would do due diligence and that the Migrants e-Registration was not a multiplicity of any existent registration.

Nigerianflightdeck is an online news and magazine platform reporting business stories with a bias for aviation and travel. It is borne out of the intention to inform, educate as well as alter perceptions with balanced reportage.
Previous FG begins week-long verification exercise of ex-Nigeria Airways staff
Next Immigration effects visa fee change to $160 for American citizens