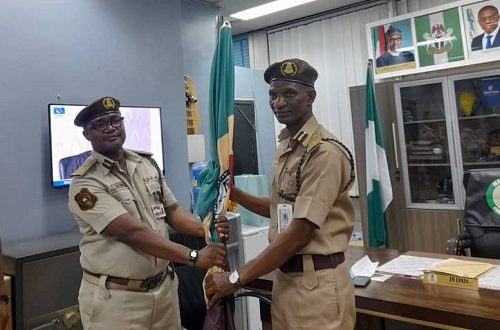 FORMER Comptroller Nigerian Immigration Service (NIS) Airport Command, Abdullahi Musa Usman today handed over to his successor, Abdullahi Dalhatu who has officially taken over the reins of office and has called on the service men to provide him the same cooperation.

Before his redeployment, Mr. Dalhatu served in Kano and before then in Lagos at the Passport Office Alausa.

The new immigration comptroller, who arrived at exactly 10 am in company of his predecessor, carried out an on the spot inspection of his men and held various meetings with senior officers working at the airport.

During the brief handover ceremony at the Murtala Muhammed International Airport Office of the NIS, the former NIS boss commended his men and the level of commitment demonstrated on the job especially as regards the professional handling of Nigeria’s international borders.

He commended his successor stating that the Comptroller General, Muhammad Babandede stating that he has chosen right, and has put a thorough professional for continuity of a working system that has yielded result.

He said there is no doubt about it that the new comptroller who is a total immigration officer will do well as he has the capability to handle the assignment.

Usman in his advise said,” As for him, I have no doubt about him as he is one among those we call total immigration officers so I have no doubt about him or his capabilities. The Comptroller General has not make a mistake; so it’s a continuity of what was so you are not going to get any gap. He has worked in so many places so himself as a person is new but to the operation he is not new and I wish him well.”

Nigerianflightdeck is an online news and magazine platform reporting business stories with a bias for aviation and travel. It is borne out of the intention to inform, educate as well as alter perceptions with balanced reportage.
Previous ACI recognizes Abuja Airport with 2020 Airport Service Quality award
Next Organized Labour again flays Airport Concession, berates sack of Turkish Airline, Caverton Helicopter workers