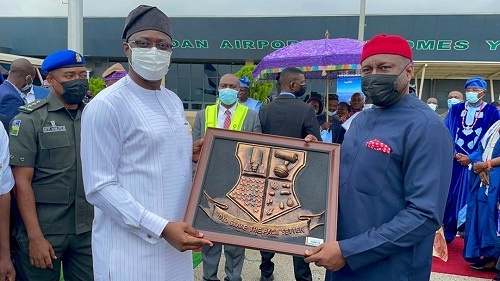 Governor Seyi Makinde of Oyo State handing over a plaque of the state insigna to Chairman Air Peace, Chief Allen Onyema at the Ibadan Airport

AIR PEACE, today launched scheduled flight operations to Ibadan Airport with the airline’s brand new Embraer 195-E2 as the Oyo State government  says the flight service would improve the economy of the state.

The inaugural flight touched down at about 11 am and was greeted with a water cannon salute by Federal Airports Authority of Nigeria, FAAN,  fire service unit.

In his welcome address, Oyo State Governor Seyi Makinde said the coming of Air Peace airline to the state is a big relief to the teaming city travelers as the airline has immediately “crashed the airfare from Ibadan to Abuja to affordable level”.

Governor Makinde, who said the state would make the route an economically viable one for the airline, added: “The coming of Air Peace will strengthen and enhance the economy of the state. We have a dry Port here that will facilitate the clearing of goods in record time. This will take the stress off importers in the state and neighbouring states and save them the stress of going to Lagos port to clear goods”.

Chairman of Air Peace, Allen Onyema, promised to link Ibadan to every geo- political zone of the country. He also said opening of the Ibadan route is part of the airline’s “no-city-left-behind” aimed at interconnecting various cities across.

Onyema asserted: “Plans are already on to commence Port Harcourt to Ibadan flight. Abuja, Ibadan to Kano flight is also already in the pipeline. I believe in the oneness of Nigeria. As a nationalist, I am going to connect all cities in the country.”

The airline was received  at the inaugural flight by the Olubadan of Ibadan, His Highness, Oba Saliu Adetunji

Nigerianflightdeck is an online news and magazine platform reporting business stories with a bias for aviation and travel. It is borne out of the intention to inform, educate as well as alter perceptions with balanced reportage.
Previous NiMET tells Nigerians to prepare for heavy 3-day rainfall from Tuesday
Next Anambra Government commends Air Peace’s no-city-left-behind strategy