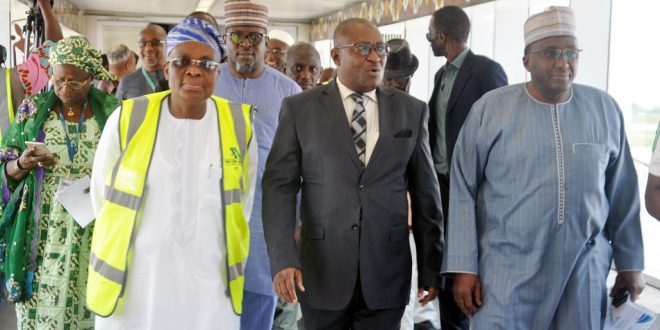 GOVERNMENTS of the Ivory Coast, Guinea and Senegal have reiterated the importance of air transportation as a unification tool for ECOWAS Countries while applauding Med-view Airline for commencing operation into francophone West Africa.
Med-view yesterday commenced flight services into Abidjan, Conakry and Dakar with its Boeing 737-500 as part of its expansion plan.
In Abidjan, the President, Alassene Oattarra reemphasized the importance of integration stating that the Nigerian airline has become a veritable tool to bring Africans together.
Represented by general manager Autorite Nationale de l’aviation Civile (ANAC), Mr. Sinaly Silue, the president wished Med-view well in its operations.
“I hope Med-view will be our company and as it is evident you are bringing people together and we cannot do that without transport, especially air transport. This is how we should build Africa, your concern is our concern and our concern yours. We can learn from each other and Med-view is fostering that.”
In Conakry, officials of the Guinea government expressed similar sentiments hinting that the airline was entrenching the Yamoussoukro Declaration of 1987 by opening the route and bridging the gap.
Ambassador of Guinea to Nigeria, Gaossou Toure described Med-view as a dynamic airline capable of bringing the liberalisation of airspace to fruition.
“The aim of the company is to integrate the ECOWAS and the chairman has explained that air transport is a passion for him and that Guinea is happy to open West Africa , Africa and the rest of the world.
Nigerian Ambassador to Guinea, Bala Mohammed Baniga who received the airline described Med-view as an airline that has achieved great things through diligence on the path of its management. ” For Med-view to fly to Guinea three times a week is a welcome development. We used to fly any airline but I am proud today we can fly our own, Med-view has broken the monopoly. I solicit that Guineans emulate management of Med-view and also invest in Nigeria.”
In Senegal, the Ambassador of Senegal to Nigeria who accompanied the airline on their journey expressed joy at how Med-view would ease trade within the sub-region as well as deepening a partnership and relationship that has been galvanized by mutual respect and friendship.
Responding managing Director of Med-view, Alhaji Muneer Bankole expressed optimism at how well the integration was going through the liberalisation of the airspace.
“The fathers who set up the ECOWAS to integrate all members into one family had vision and a plan. We are making that come to fruition. This is the beginning of a big relationship as we are going to integrate all of  West Africa.

Nigerianflightdeck is an online news and magazine platform reporting business stories with a bias for aviation and travel. It is borne out of the intention to inform, educate as well as alter perceptions with balanced reportage.
Previous Aviation Committees ask BASL to provide 36 years concession agreement
Next What you need to know about Emergency Exit seats on aircraft