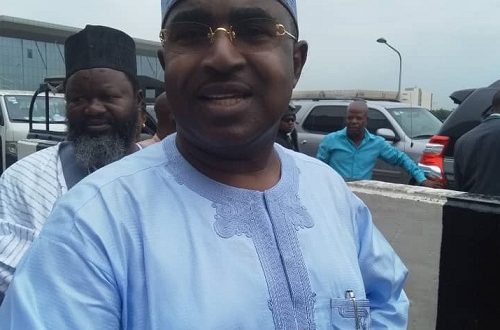 FOLLOWING a recent case currently ongoing in Kano, where an innocent would have been convicted and put to death, Federal Government has resolved forthwith to penalize any airline whose staff collude with baggage handlers to swap tag names on bags containing illicit drugs on out-bound flights and implicate innocent travelers.

Marwa said : “What I said is real that some airline staff and some persons collude to check in and tag passengers name on baggage that they are unaware of and does not belong to them. We have a recent incident at the Kano Airport where a passenger was arrested in Saudi Arabia and he denied ownership of the bag.

“Through the Closed Circuit Television Camera at the Kano airport, the National Drug Law Enforcement Agency (NDLEA) officials discovered that he was innocent as the bag was checked in and tagged in his name by an airline staff.

“Henceforth, such airlines will be penalized once we discover that such a thing happened on their flight.”

According to him, the move is necessitated by the high number of Nigerians languishing in foreign jails as well as the recent execution of a Nigerian woman for drug trafficking in Saudi Arabia.

Marwa said the committee was inaugurated by President Muhammadu Buhari to bring up recommendations that were implementable and sustainable for government to implement towards addressing the scourge of drug abuse in Nigeria.

He said though the drug abuse crisis was a huge challenge, it was however surmountable especially with the right political will being demonstrated by the present administration in bringing it to an end.

Marwa commended the various security agencies at the MMIA for their vigilance in preventing the importation and exportation of drugs by traffickers.

He said the government was ready to provide all forms of assistance to them that would aid detection of illicit drugs and arrest of traffickers at the airport.

Earlier, Mr Garba Ahmadu, Commander, NDLEA, MMIA Command, said that at the MMIA in 2018, 93 people were arrested for drug trafficking with 5,377 kilogrammes of illicit drugs seized.

“From January 2019 to date, 26 people have been arrested for drug trafficking and a total of 94 kilogrammes of illicit drugs were seized. A total of five convictions have been recorded so far.

“The major drugs were cocaine, heroine, methaphitamine and ephedrin. These statistics show the reality and the enormity of the drug trafficking challenge in MMIA,” Garba said.

The security stakeholders at the forum identified the challenges being faced at the MMIA to include lack of high technology scanners, Advanced Passenger Information (API) System for profiling of passengers as well as sniffer dogs, inadequate deployment of Information Communication Technology gadgets, poor remuneration of adhoc staff such as cleaners and bag handlers

Nigerianflightdeck is an online news and magazine platform reporting business stories with a bias for aviation and travel. It is borne out of the intention to inform, educate as well as alter perceptions with balanced reportage.
Previous Turkish Airline set to commence flights from P/H June 24, hails operations from new NAIA terminal
Next Owerri Airport fire: FAAN MD visits, says insurers ready to bear burden