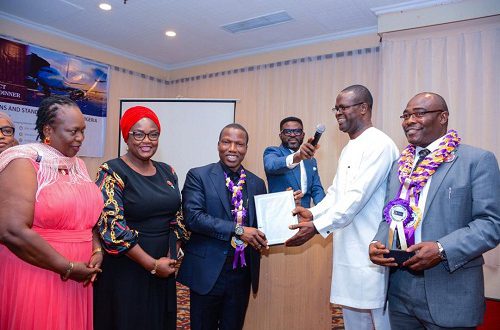 Managing Director FAAN, Captain Rabiu Hamisu Yadudu at the Leadership Impact Program of the Charted Institute of Logistics and Transport held at Sheraton Hotel and suites

MANAGING Director of the Federal Airports Authority of Nigeria (FAAN) Captain Rabiu Hamisu Yadudu has said that as part of the safety culture and improvement initiatives, FAAN has put in place various methods to mitigate issues as runway incursions, Wildlife habitat modification to reduce occurrence of bird strikes and other means to make its airports nationwide safe.

Captain Yadudu made this known during his presentation: Airport Operations and Standards of Safety in Nigeria at the Leadership Impact Program of the Charted Institute of Logistics and Transport held at Sheraton Hotel and suites.

According to Yadudu, to ensure the safety at the nation’s aerodromes, the Nigeria Civil Aviation Authority (NCAA) conducts Aerodrome safety oversight, audits and inspections, which he said are, determined by various circumstances.

The FAAN helmsman said that the NCAA has a surveillance policy where they carry out safety audit on aspects of the aerodrome multiple times every year.

He went on to explain that against the backdrop of ensuring the airport is safe, FAAN has layers of safety committees which effectively deals with issues from prevention of runway incursions, excursions to accidents.

“These committees include: The Bird and Wildlife Hazard Committee, Runway Safety Committee and Aerodrome safety oversight programmes are constantly carried out by the NCAA and various certified personnel i.e. audit, inspections and surveillance.

“The reporting of safety hazards and occurrences is encouraged at every level in the organization. This promotes learning from these events and discussing solutions, which invariably leads to a continuous reduction in the rate of accidents at the airports.

“Likewise, the complexities of airport operations in the major aerodromes requires continuous hazard identification and risk mitigation measures. Investments in human capacity development by way of training and retraining, infrastructure, equipment, maintenance and technology are key, thus ensuring that safety is the driving force behind airport operations,” he said.

“Airport Infrastructure Upgrade ▪Commissioning of new terminals at Port Harcourt and Abuja. Kano and Lagos to be commissioned next year. Contract awarded for self-check-in, baggage drop-off and automated boarding gates as part of smart airport project which will be completed before end of next year. Closure of Enugu airport to fix the runway to ensure maximum safety.

Other include,” Work on the taxiway ‘B’ (central runway) at Lagos airport soon to commence. Wildlife habitat modification to reduce occurrence of bird strikes Human Capacity Development, Massive human capacity development through numerous International and In-house training and re-training programmes

Nigerianflightdeck is an online news and magazine platform reporting business stories with a bias for aviation and travel. It is borne out of the intention to inform, educate as well as alter perceptions with balanced reportage.
Previous NCAT to acquire 6 Diamond training aircraft in February 2020
Next Air Peace says reports of US seized plane link is false