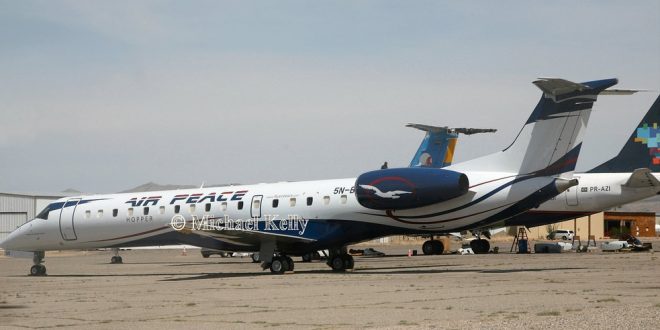 AIR PEACE has stated as false, reports linking the airline to a ceased private aircraft in Atlanta, USA.

According to Air Peace Media Executive, Stanley Olisa, the company does not currently have any aircraft in the US.

According to him, linking Air peace to the aircraft that was ceased in the US is the act of mischief makers locally who are bent on tarnishing the image of the airline and its owner.

We have since learnt that the actual owner of the aircraft appeared in court on Tuesday in the US but unfortunately, some people are still linking the aircraft to Air Peace.

Meanwhile, Federal agents in the United States had seized seized a jet belonging to a Nigerian facing trial in New York, in an international fraud scheme, the Nigerian-owned jet was seized in Georgia, United States.

The jet was parked at Peachtree DeKalb Airport, a county-owned, public-use airport in DeKalb County, Georgia, United States, as the federal agents processed the plane for evidence.

A removal hearing will also be held to send the Nigerian back to New York, where the charges he faces were originally filed

The owner of the plane has not been identified yet. But it appears the plane was seized private plan when it was offered for sale.

Nigerianflightdeck is an online news and magazine platform reporting business stories with a bias for aviation and travel. It is borne out of the intention to inform, educate as well as alter perceptions with balanced reportage.
Previous FAAN reels out safety improvement initiatives around airports
Next NCAA slams Turkish Airlines, suspends carrier from Nigeria over baggage issues