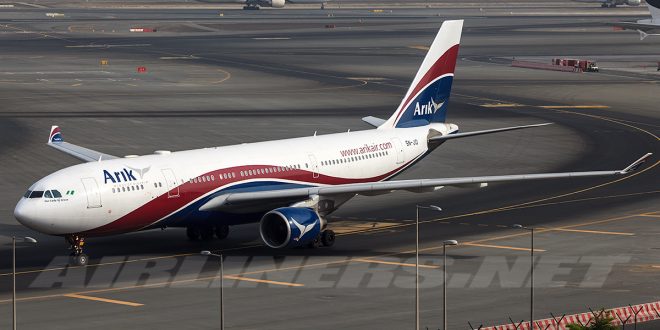 Arik Air yesterday accused the Federal Airports Authority of Nigeria (FAAN) of disrupting disrupted its operations at the domestic General Aviation Terminal and international terminal of the Murtala Muhammed Airport, stating that workers of the agency prevented Arik Air from gaining access to the Air-side of both terminals.

Access to the Air-side is critical and fundamental to the airline’s operations for moving catering, supplies and other sundry items to the aircraft, as well as the movement of its personnel to ready the aircraft for departure.

This access is also necessary for the airline to conduct secondary security screening, mandatory security checks and for securing the aircraft at all times in line with International Civil Aviation Organization (ICAO) standards and recommended practice.

The airline in a statement to Nigerianflightdeck.com expressed dismay and disappointment that the Airports Authority has again taken the law into its own hands resorting to strong-arm tactics against the airline in the past and most recently in May this year.

The statement read,”It is already in the public domain that Arik Air and FAAN have a lingering disagreement on the long-standing and unsubstantiated claim by FAAN of spurious indebtedness of the airline to the agency which is now before the Federal High Court in Lagos, at the instance of FAAN. “

“Both sides were reconciling payment accounts between the institutions over the charges paid by Arik Air to date and in this regard, Arik Air has been providing all the needed assistance and cooperation to conclude the reconciliation process. “

“However, FAAN has shown total disregard for the laws of the Federal Republic of Nigeria by carrying out such disruptive action again. “

“In Suit No: FHC/L/CS/1558/2015 brought by FAAN against Arik Air before a Federal High Court in Lagos, the court on 20 June, 2016had ordered that both parties maintain status quo ante-bellum until Ruling on the Ex-parte is delivered.  The matter was further adjourned to 10 October, 2016. “

“On several occasions in the past weeks, Arik Air has equally served the order of the court to FAAN since they claimed ignorance of the ruling. “

“Blatant defiance of the laws of the country and disrespect to the High Court should not be tolerated and we appeal to the judiciary to intervene in this matter and take appropriate action to uphold the laws of the nation.   “

According to Arik, this disruption by FAAN has further inconvenienced the travel plans of thousands of passengers who were already affected due to the acute scarcity of aviation fuel (Jet A1) in the recent weeks.

The airline in closing apologized to its passengers for any inconvenience experienced due to this unwarranted disruption and unlawful action by FAAN.

Nigerianflightdeck is an online news and magazine platform reporting business stories with a bias for aviation and travel. It is borne out of the intention to inform, educate as well as alter perceptions with balanced reportage.
Previous Power supply: Pivot Engineering, partners deliver three Substations
Next FG promises frequency increase for foreign airlines, assures pilgrim commission of support