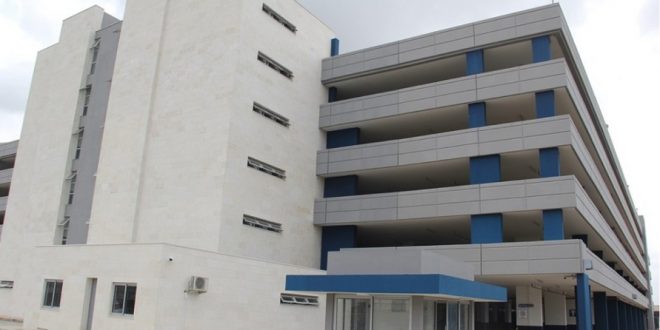 The 1,300 capacity multi-storey car-park at the Murtala Muhammed International Airport

Managing Director of the Federal Airports Authority of Nigeria (FAAN), Engineer Saleh Dunoma, who commissioned the car park said the facility was long overdue and also timely as “it will improve passenger facilitation and reduce the menace of indiscriminate parking within and around the airport”.

He added that “the project is one of the numerous partnerships FAAN has, and is exploring to improve the infrastructural developments at our airports”.

The MD who was represented by the Director of Engineering Service, Engr. Salisu Daura, explained that the “event is a testament of a Public Private Partnership with FAAN and Seymour Aviation Limited.

“The facility which is being commissioned today is a six-level car park facility of 1300 cars parking capacity built on a land measuring 9119.969m2, with a 30 years tenure”.

The FAAN boss added that FAAN has put in place some measures to improve service delivery, even as he appealed to relevant stakeholders to cooperate with FAAN in this regard.

Managing Director of Seymour Aviation Limited, Mr. Francis Ikenga said “the multi-level car park was conceived as part of our corporate aim of supporting FAAN’s objectives of making MMA a hub for the West African aviation industry and destination of choice to airport service providers and end users”.

He said, “we consider this project a major mile stone for the country and a national pride to the stakeholders and the citizens as a whole”.

Explaining that the facility meets international standard, he listed some of the other features of the ultra-modern car park to include Male and female conveniences on every floor, ablution areas, executive waiting lounge, public address system to be linked with flight arrival/departure information, commercial lifts, bomb detector etc.

Applauding the commitment of the management of FAAN  in seeing to the completion of the project, he stated that “this event wouldn’t have been possible without the cooperation of FAAN personnel and  financial support of banks”.

Car parking in the facility costs N500 and N600 per hour respectively for cars and SUVs respectively, while additional parking hour attracts N100 only. It costs N1000 for buses and N200 for additional hour. However, you must be very careful with your parking ticket as loss of ticket attracts a penalty of N5000 plus payment for time used

Nigerianflightdeck is an online news and magazine platform reporting business stories with a bias for aviation and travel. It is borne out of the intention to inform, educate as well as alter perceptions with balanced reportage.
Previous Emirates, flydubai partnership announces first codeshare routes
Next Unions’ picketing of airlines unsuccessful as Air Peace commends security agents, FAAN