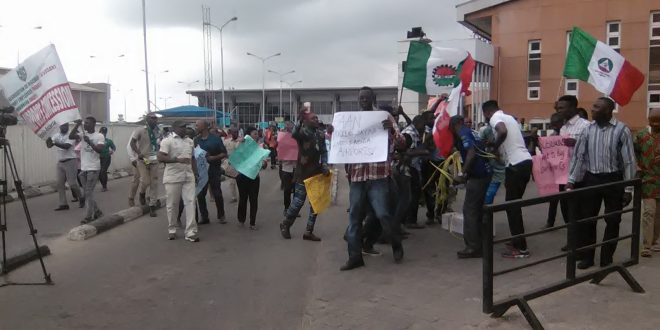 PLANNED picketing of carriers in the Nigerian aviation industry did not go down as unions planned as they were barricaded from entering into the terminal building to disrupt any flight operations of airlines over alleged casualization.

The unions could only gyrate around the terminal and watch helplessly as check-in and flights took place unhindered.

One of the carriers in which the unions’ ire was aimed at, Air Peace, in the wake of the event earlier today commended the Nigeria Police Force, the Department of State Services (DSS) and the Federal Airports Authority (FAAN) for preventing the disruption of its flight operations by aviation unions at the Murtala Muhammed Airport in Lagos.

The airline stated that the above mentioned security outfits discharged their responsibility to protect law-abiding members of the public with a great sense of professionalism.

Members of the National Union of Air Transport Employees (NUATE) and other aviation unions had threatened to picket Air Peace over claims of casualisation and refusal to grant them recognition for the purposes of unionizing the airline’s staff.

But in a statement, the airline dismissed the unions’ claims of casualisation as a failed attempt to give legitimacy to the “illegal” picketing, insisting that the carrier had no casual staff in its employ.

The airline also maintained that it had no legal obligation to compel any member of its staff to recognise or join any of the unions in the aviation sector.

Cautioning the unions to drop their plan to disrupt its operations, the carrier urged the police, FAAN and other security agencies to intervene to prevent a breakdown of law and order.

Early on Thursday, police, DSS and FAAN aviation security personnel took positions at the General Aviation Terminal (GAT) of the Murtala Muhammed Airport to douse the mounting tension and prevent a clash between the unions and staff of the airline.

In a statement issued by the Corporate Communications Manager of Air Peace, Mr. Chris Iwarah on Thursday, the airline said the security agents deployed to the airport to prevent a clash between the unions and its staff conducted themselves in a professional manner.

The airline confirmed that the proactive steps taken by the police, DSS and FAAN saved its flights from being disrupted by “jobless unionists who are only out to deceive members of the public and exploit unsuspecting workers.”

The airline described the picketing exercise by the unions on Thursday as “unpopular and weak,” commending its staff for shunning attempts by “unpatriotic elements masquerading as labour leaders” to use them to reverse the success of the carrier.

Air Peace pledged to continue to use all legitimate means to prevent the disruption of its flight operations by the unionists, who threatened to return another day to picket the airline.

Nigerianflightdeck is an online news and magazine platform reporting business stories with a bias for aviation and travel. It is borne out of the intention to inform, educate as well as alter perceptions with balanced reportage.
Previous FAAN commissions 1,300 capacity multi-level car park at MMIA
Next Passengers obligations and things to know about air travel