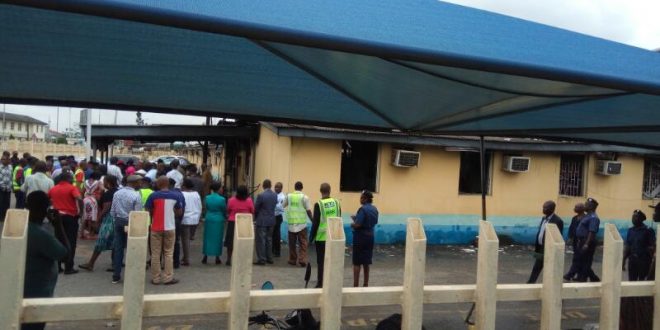 Normalcy returns as FAAN commences investigation into cause of fire outbreak­

NigerianFlightDeck 11th April 2017 Aviation News Comments Off on Normalcy returns as FAAN commences investigation into cause of fire outbreak­ 1,070 Views

THE fire incident at the headquarters of the Federal Airports Authority of Nigeria (FAAN) in Lagos this morning April 11, 2017 has been put out completely with the authority stating that it would get to the root of the incident.

The incident, which affected some offices, is being investigated right now to find out the cause of the outbreak according to a statement signed by the Ag General manager, Corporate Affairs, Mrs. Henrietta Yakubu.

It read,” The fire department, in collaboration with the Lagos State Fire Department and other security agencies   however responded swiftly by curtailing the spread of the fire, as normalcy is being restored already.”

“The Authority will like to assure travelers, airport users and the general public that the incident did not affect operations at any airport in any way as normal operations continue unhindered.”

Meanwhile, Airport Commissioner of Police, CP Besan Gwana has said that the area has been sealed off but also stated that no one can predetermine what caused the fire until a thorough investigation is carried out.

“This morning about 9am, policemen on patrol observed that smoke was billowing from FAAN administration building and they quickly drew our attention to it and we informed the firemen and the authorities of FAAN. I was here when the firefighters arrived well on time; and they were able to put out the fire on time. “

“ The whole placed has been sealed up and will be sustained. We will talk to the FAAN authorities to improve on security since it has its own security outfit. I believe efforts will be re-doubled to ensure that no unauthorized person gains access into the facility. Now, one cannot contemplate any guess as to what led to the inferno. Investigation is ongoing and that will determine what caused the fire outbreak. “

Nigerianflightdeck is an online news and magazine platform reporting business stories with a bias for aviation and travel. It is borne out of the intention to inform, educate as well as alter perceptions with balanced reportage.
Previous Fire outbreak at FAAN headquarters, traffic building at MMA access roads
Next Sirika says Abuja airport runway 95% ready, indicates plans to commence 2nd runway