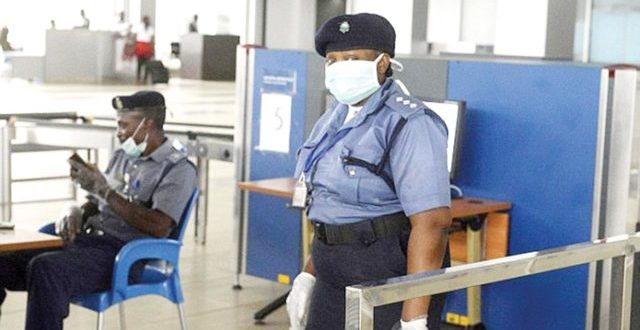 FAAN AVSEC to bear arms, other gadgets in three months

THREE months from now, Federal Airports Authority of Nigeria (FAAN) Aviation Security will bear arms at airports across the country to heighten security following various security infractions that have happened around the country.

Minister of Stare, Aviation, Senator Hadi Sirika made this known at the just concluded 5th Aviation Stakeholders’ Forum at the Nigeria Air Force (NAF) Conference Centre, Abuja where he reeled out some challenges the country had to deal with and cautioned passengers who wanted to take laws into their hands instead of informing proper authority.

According to him, arms like teasers, batons, sniffer dogs, sidearms will be bequeathed to security agents around the country as the president has given the approval.

He said the officers would embark on training on how to use the arms and other gadgets that would go along with weapons.

“We got the approval to train AVSEC officers to bear arms in the next three months like the Transport Security Administration (TSA) in the United States of America. They will get new uniforms, Sniper dogs and wear new looks, safety and security is the primary concern of this administration, therefore, we are not leaving any stone unturned”, he said.

Since the announcement was made sometime in 2017 a lot of major infractions had taken place including the Wammako, Sokoto and Bauchi incursions as further reasons.

Aviation security personnel were linked to the bearing of arms after the security infraction involving Turkish Airline.

Sirika said, “Security infractions like what happened with Turkish Airlines has given further rise to this and Turkish Airline has not stopped this, they still come with a smaller aircraft and do not bring people’s luggage back.

That is how the Abuja infraction took place, they didn’t return the luggage after day one, they returned a few and then they people got angry and frustrated and took laws into their hands and overpowered aviation security and entered the airside. However, that is one of the many security issues we are trying to stop as a deterrent. Also see what happened in Sokoto with former governor Wammako.”

“So the passengers will be cautious too and not at any provocation beat up security personnel to access the secure area which in itself is a crime.”

Sirika also referred to the publication of 10 Final Reports on serious incidents out of 28 reports released since the creation of Accident Investigation Bureau (AIB) in 2007, attaining 36% of total reports released.

He said it launched the AIB Nigeria mobile app in November 2017 to ease the process of reporting air accidents and serious incidents, and to enhance access by the public apart from rehabilitating the Emergency Operating Centre and furnishing of the Resuscitation Centres at Abuja and Lagos Airports.

Nigerianflightdeck is an online news and magazine platform reporting business stories with a bias for aviation and travel. It is borne out of the intention to inform, educate as well as alter perceptions with balanced reportage.
Previous Investors, government express divergent views over aviation industry future
Next Government must play aero politics to support long-haul flights -Air Peace insists.