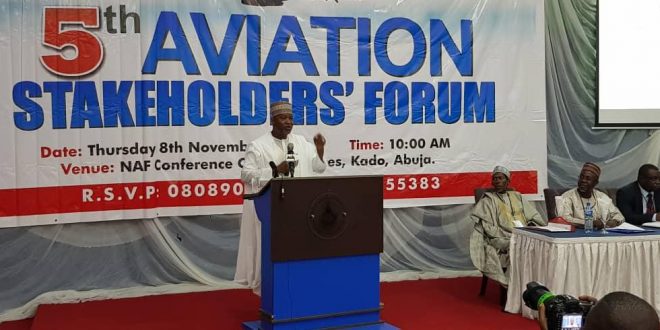 INVESTORS, professionals and participants converged in Abuja to make themselves heard and find solutions to some teething challenges bedeviling the industry as well as seek clarifications to issues that have hitherto been contentious in the past few months.

The 5th Aviation Forum as it was tagged offered aviation investors the opportunity to vent and some another opportunity to review what government has done and where they needed to improve.

The forum gave the Minister of State, Aviation, Senator Hadi Sirika an opportunity to explain issues that arose from the suspension of the proposed national carrier, especially with regards funds alleged to have been spent.

The Minister while explaining some of the misconceptions said the reason why the Nigeria Air project was suspended was because of the extra 13 months it took for the Transaction advisers to complete the works after they took over from Lufthansa who brought in some outlandish demands to be transaction advisers.

According to him, Lufthansa had come in with an independent bid to become transaction adviser which is a practice but gave some conditions which included tax free holidays and an upfront payment of 75%, and for government to pay the upfront into an escrow account, this was rejected before the eventual transaction advisers were got.

He was however confident on the project’s return soon, stating that the setback is only temporal.

A former managing Director of Nigeria Airways, Captain Jonathan Ibrahim, who took the stage to react first thanked the President Buhari-led administration for promising to and actually fulfilling payment of severance benefits of ex-airways workers.

He went further to laid the Nigeria Air project asking people not to kill it as it was intended for good. He said,”I see comments about this new national carrier and most of them are not from those who know. There is everything to gain from this national carrier from the employment it would create to other benefits attached.”

Also a former director of the National Tourism Development Corporation (NTDC), Dr. Omotayo Omotosho in her remarks said the national carrier project was thought out as it would help the nation to balance out high ticketing for foreign trips.

“… do you know how much to buy a ticket to New York or Atlanta from Nigeria? I want to book a business class ticket from Nigeria, I see over N3million and when I want to book an e only ticket one pays over N800,000. The tickets differ when you are buying from there, I have a daughter in the United States and when I ask her to book a ticket she just tells me we need a strong airline.”

A whistleblower, George Oboh, who revealed certain information about the technical partners and stated that he got a letter from them stating they had nothing to do with the national carrier also spoke.

According to him, after listening to the Minister’s presentation on the alleged expended funds , he said that his organisation was doing a public service and isn’t sorry for seeking the truth and putting it in public domain.

Oboh however said all over the climes elsewhere when agreements are signed they are immediately uploaded and their crux can be viewed but secrecy is the challenge in Nigeria.

He said,” unlike other climes when you sign agreements here it is shrouded in a lot of secrecy and that should not be the case.however, I have listened to your presentation and we will get it and with your explanations, review what we had gotten and if it tallies, we will drop all contentious issues. Expenditure must be made available to civil society if there are issues you give answers to we drop, if not we go to court.

Sky jet Chairman, Dr. Kashmir Shettina, who took the floor reeled out a myriad of issues that affected his operations and his business and asked the minister to look into these .

He told the gathering that his business has been hit hard from fuel challenges to expatriate pilots who cost him a lot.

According to him, one of his costliest challenge is when he trains pilots with a bond and they jump to other airlines disregarding the bond and the ministry or NCAA can do little or nothing about it.

“I have obtained five judgements against pilots and I haven’t enforced them, this is as a result that after training them, they will now go elsewhere and the NCAA will say they cannot go into that. Something must be done about it honorable minister. Do you know that my place is now a training ground? Once people want to train they say send them to Skyjet.”

” All I know is aviation,I have or know nothing else I have invested over $150million in this business. I have applied for land from FAAN to develop something and I have been denied so how can you attract foreign investors when local investors cannot invest freely. These foreign investor are looking at what happens with local investments and with that, it scares them away.”

He said however that he was not in support of the national carrier but would not go to social media and start ranting but would rather tell the minister face to face, which he has done.

In reaction, Sirika apologized and said the country still welcomes investments and he has not denied or asked FAAN to deny land to anyone who wants to develop.

On the issues of the pilots and the bond, the minister regretted but said the Ministry tries to avoid issues of employment but that should not stop the Skyjet Chairman from training more professionals.

Speaking next, an industry player and Head of Research Zenith Travels, Olumide Ohunayo took his time out to and explained to the minister certain indices he felt the ministry got wrong.

He said,” I feel there is betrayal somewhere among the Airline Operators and that is why when the national carrier was announced a lot if them lauded the project individually only to turn around through their body the AON to kick against it, it is that betrayal that may have spurred the Air Peace Chairman to go solo.”

Ohunayo also disagreed with the Minister on his explanations on why he gave Ethiopian Air lines more entry points into Nigeria, stating that his explanation was not the best for the country and growth of the airlines.

He was upset that the minister said 20 pilots would be employed by Ethiopia as part of reciprocity.

He now reproposed the Fly Nigeria Act stating that it was one way of growing and aiding the domestic carriers to grow.

According to Ohunayo, the minister has gotten almost everything he takes to the National Assembly passed recalling that when former minister, Babatunde Omotoba brought it up, he was shut down by the NASS.

He however said, Sirika can see the Act through and it would help the country’s airlines as most heavy travellers are government functionaries.

Responding Sirika said as at the time the policy of giving Ethiopia more entry points came up, he felt it was what was best for 180 million Nigerians some of whom were traders and needed to have access to flying to buy goods from easier points to save money instead of flying to Lagos and spending more than their profit.

He however agreed that the Fly Nigeria Act was worth looking into and as Minister that was something he could enforce, a fly Nigeria Act which stipulates that once any Nigerian carrier is going on that route and one is flying with public funds, the Nigerian airline must be used.

” As Minister it is something I can do as policy, ” he declared.

Nigerianflightdeck is an online news and magazine platform reporting business stories with a bias for aviation and travel. It is borne out of the intention to inform, educate as well as alter perceptions with balanced reportage.
Previous Minister declares Abuja terminal will be complete in five weeks
Next FAAN AVSEC to bear arms, other gadgets in three months