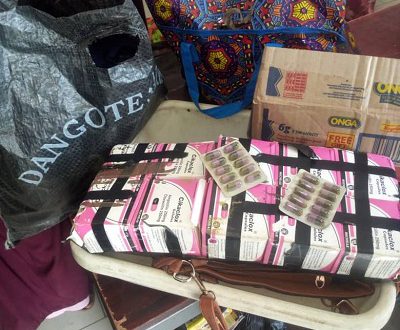 SECURITY seems to have been stepped up at the Mallam Aminu Kano International Airport as intensive screening has led to the capture of yet another traveler with criminal intent, this time a drug courier who was intent on implicating yet another innocent by inserting hard drugs in her bag.

Aviation Security (AVSEC) at the Kano Airport apprehended a passenger, Hassan Maimuna Barde, a Nigerian with passport no. A10408607 who was discovered to have concealed substances identified as drugs inside her bag, attempting to beat the screening process.

Barde was also discovered at the same process to have conspicuously inserted some of the drugs inside an innocent lady passenger that they were caught together.

The two intending passengers were to travelled with Egypt Air. They were apprehended and documented at crime and handed over to the National Drug Law Enforcement Agency (NDLEA), MAKIA, for further investigation.

An inside source at the Airport told Nigerianflightdeck that the plan was to ensure zero tolerance against vices that tend to ruin the country’s image and in a way save the lives of the drug trafficker who may or may not know that been caught in the Kingdom of Saudi Arabia is an automatic death sentence.