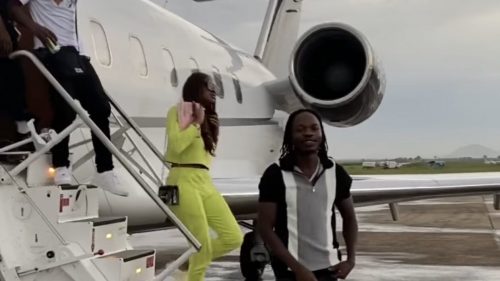 EXECUTIVE Jet Services Limited has said that there was no indication that they would be flying celebrity musician, Naira Marley as the names on their passenger manifest did not indicate him as a passenger and apologized stating that the approved airlift was a mistaken identity.

An investigation carried out following the company’s suspension yesterday by the Minister of Aviation, Senator Hadi Sirika revealed that the name Naira Marley was not in the manifest given to Executive Jet Services Limited; rather, the name, Fashola Babatunde, presumably the Minister of Works and Housing and nine others were shortlisted for the flight.  Read Also: Interstate movement ban: FG suspends Executive Jet Services for flouting directives, flying Naira Marley

The airline which has since apologized to the Minister of Aviation, Sirika in a letter signed by the Chairman/CEO of the company, Dr Sam Iwuajoku, Executive Jet Services explained, “So on Saturday morning, 13th June, 2020 my staff called and told me that they have a charter flight to Abuja and that the passengers were already at the lounge.

“As a rule, passenger manifest is always sent to me before any departure. When I went through the manifest and I saw Fashola Babatunde, I thought it was the Hon. Minister of Works going to Abuja with his men, so we decided to do the flight, since he is serving Minister of the Federal Republic of Nigeria…”

“We are sorry for this mistake  and we promise that it will not happen again.”

According to the passenger manifest obtained by Nigerianflightdeck dated, June 13, 2020 made available to us, the Lagos-Abuja-Lagos flight conveyed to Abuja others including Adewunmi Segun, Chinonso Opara, Fashola Adeshina and Adeyeye Tobi.

The company also said that in addition, it was the approval already secured for the airlift of Justice Adefope Okoji, who was already in Abuja that was used to fly Babatunde who later turned out to be Naira Marley and his entourage.

The Justice was contacted on Saturday for the Sunday flight and he said he was already in Abuja; the company was informed that there was another flight and it demanded for the manifest of the flight.

There was no indication from the names in the manifest that Naira Marley was part of the flight; it was assumed that the Minister of Works and Housing was actually the person that was travelling.

Nigerianflightdeck is an online news and magazine platform reporting business stories with a bias for aviation and travel. It is borne out of the intention to inform, educate as well as alter perceptions with balanced reportage.
Previous Updated: Interstate movement ban: FG suspends Executive Jet Services for flouting directives, flying Naira Marley
Next AIB-N, NAF to collaborate on crash site security as agency complies with relocation directive