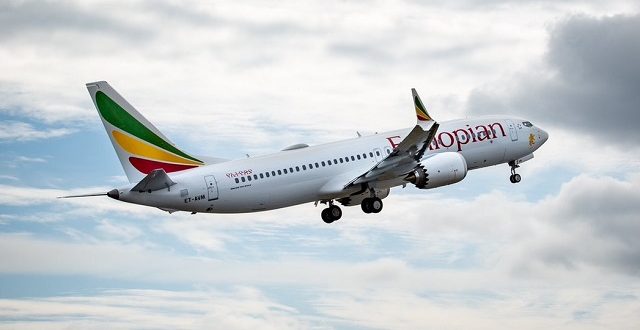 ETHIOPIAN Airlines Chief Executive, Tewolde Gebremariam yesterday (Sunday, November 17) said the airline is yet to decide whether to take more deliveries of the 737 MAX, as aircraft manufacturer Boeing completes revisions to the aircraft’s design.

The 777 Max jet was grounded worldwide in the wake of crashes in Ethiopia and Indonesia.

Speaking at the Dubai Airshow whether he supported changes to software and training being finalised by Boeing, Gebremariam said, “It is still work in progress… We will have to see it completed and the result of the further tests that are still to come.”

Asked whether Ethiopian Airlines would take any further deliveries of the aircraft, of which it has more than 20 on order, Tewolde told reporters, “We have not yet decided.”

He was speaking at the Dubai Airshow after signing an agreement with Boeing to retrofit internet connectivity on a fleet of 787 Dreamliners that the airline already has in service.

He said the airline had no reservations about signing a new deal to enhance the 787 with Boeing, which was “more than 100 years old and a high-quality engineering company.”

But asked about overall relations with the U.S. planemaker, he said, “It is work in progress. Let’s wait patiently and see the final return to service.”

He also said Ethiopian Airlines might add further orders for the Airbus A350, a rival to the 787.

“We have an order of 24, so depending on the market need, we will increase.”

Reports into the March 10 crash in Ethiopia and a Lion Air accident in Indonesia, which killed a combined total of 346 people, have suggested an automated system erroneously pointed the planes’ noses down repeatedly after take-off.

Boeing says it has revised the software system to prevent repeated dives and is waiting for the approval of U.S. and global regulators before putting the plane back in service, expected early next year.

Tewolde played down past suggestions by the airline that it could take a stake in debt-strapped South African Airways.

“We are discussing commercial cooperation to work together and code-share, and training and maintenance cooperation,” he said.

The airline, which competes with large Middle East carriers to connect long-haul passengers, has a strategy of building a patchwork of African routes and to fly customers toward expanding Asian markets.

Nigerianflightdeck is an online news and magazine platform reporting business stories with a bias for aviation and travel. It is borne out of the intention to inform, educate as well as alter perceptions with balanced reportage.
Previous Med-view Airline’s 737-500 arrive Lagos ahead of operation recommencement
Next Elin Group Nigeria orders three Dash 8-400 at $99 million from DHC