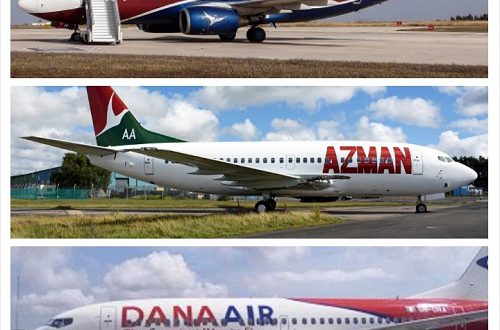 AIRLINES using the Lagos airport as operational hub have restarted flight services to various degrees following the ease up of violence in certain areas of the country during the hijacked #EndSARS peaceful protest.

Airlines using Lagos as their hub points on Wednesday and Thursday announced flights cancellations due to the curfew imposed by the Lagos State Government necessitated by the #EndSARS protest rocking the nation.

However, today airlines including Dana Air, Arik Air and Azman Air as at the time of the publication have reached out to their passengers and potentials telling them of the status change.

Arik Air which said it resumed lean operations today Friday, October 23 to some destinations where there are no curfews.

A stamens by Arik spokesman, Adebanji Ola read,”Specifically, the airline said it has started operating flights from its second hub in Abuja to Port Harcourt, Ilorin, Benin, Kano and Yola.

Dana Air on its part announced a resumption of full operations from October 24 stating that all tickets within the period of the curfew remain valid and can be rescheduled free.

A notification from Dana Air read,”Following our earlier announcement on cancellation, we are pleased to inform you that we will resume full flight operations from tomorrow the 24th of October 2020.

“Once again our heart goes out to our brothers and sisters who lost lives and properties during the protest.

Recall some airlines had to cancel flights augmented by curfews imposed on various states by the government including Lagos,Edo State, Delta State government following violent protests in those states.

Already, Arik Air had cancelled flights when the Lagos state government had initially issued a curfew for 24 hours announced cancellation of flights for the 21st of October, 2020.

Azman Air has also announced commencement of its Lagos and Benin schedule which was shut due to the pandemonium in those states.

The airline in a notification said it will start from Sunday, October 25, 2020 and would reschedule tickets on flights at no extra cost to the passengers.

However, life seems to be gradually returning to the skies.

Nigerianflightdeck is an online news and magazine platform reporting business stories with a bias for aviation and travel. It is borne out of the intention to inform, educate as well as alter perceptions with balanced reportage.
Previous Arik Air, AWA cancel October 21 flights as stakeholders react to public fears
Next Air Peace sets sights on  commercial flights into Johannesburg, S’Africa