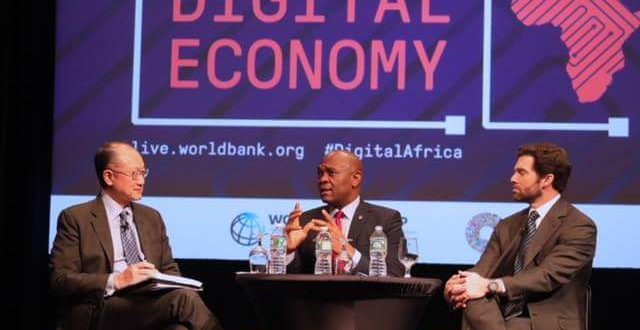 The Tony Elumelu Foundation Founder spoke alongside World Bank President Jim Kim and LinkedIn CEO Jeff Weiner in a fireside chat on advancing the digital economy in Africa during the annual spring meetings of the International Monetary Fund and the World Bank in Washington, DC.

During the discussion, he sent a strong message on the importance of leveraging entrepreneurship to enable Africa to leapfrog traditional development paths.

“I speak as someone who has supported young African entrepreneurs. I see enthusiasm, intellect, I determination, drive and discipline – you invest $5,000 and indeed they apply this to their purpose,” Elumelu said. “So why don’t we harness all of these people? Why doesn’t government replicate this model?”

When asked about the technological advancements of today, which will be responsible for shifting African development into overdrive, Elumelu was emphatic.

“It is our young people – the 60 percent of [African] people under the age of 30 who will come up with innovations that might help to pull Africa out of where it is today. We need to prioritize them, to give them support by removing the stifling policies holding them back. If we remove those, we will unleash their creativity onto the world.”

While moderating the discussion, World Bank President Dr. Jim Yong Kim, said policy makers in Nigeria and other African countries are ill-prepared to compete in the digital technology space. Elumelu conceded that without critical infrastructure, driving technological advancement would be difficult.

Elumelu, who is also Chairman of the United Bank for Africa Group, also highlighted regulation, intellectual property and the need to incentivise investors, as other factors that would help drive the digital economy on the continent.

“Let’s fix policy issues and all these issues I have identified and investors will come to Africa,” Elumelu added.

Nigerianflightdeck is an online news and magazine platform reporting business stories with a bias for aviation and travel. It is borne out of the intention to inform, educate as well as alter perceptions with balanced reportage.
Previous NAMA to grow IGR to upgrade navigational services
Next SouthWest mid-air accident: NCAA mandates compliance with FAA directive by all operators