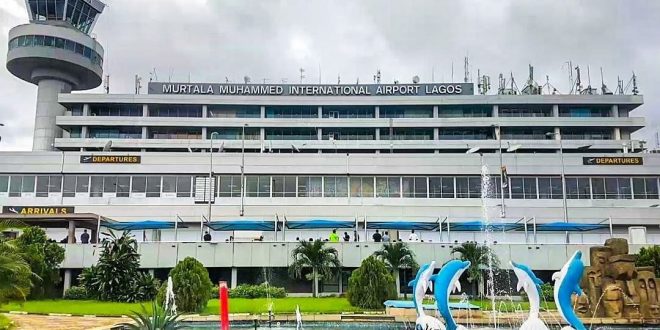 ONE  Mr. Tony Lucky, a passenger who arrived Nigeria onboard Turkish Airlines last Friday, was said to have violently attacked officials of the Nigeria Immigration Service (NIS) attached to the Murtala Muhammed International Airport (MMIA), Lagos over his profiling by the officials but was said to have apologised after his conduct.

Lucky who was allegedly drunk had come into the country from Italy on December 14, 2018 without international passport, which is against aviation standards.

It is required that any passenger who enters into the country with such certificate must have his or be five fingers captured, but Lucky refused to follow the protocol and refused to be captured by the officials.

The ETC is meant to be submitted to immigration after profiling.

Eyewitness who was  at the scene told our correspondent that officials of immigration insisted that Lucky bluntly refused to be profiled by the officials and went amok by attacking them when they insisted on following protocols.

During the ruckus, Lucky attacked all the officials present and refused to supply his finger prints until he was eventually overpowered by security details at the airport.

When he was taken to the duty room and after sobering up, he wrote an apology letter  for his misconduct and .

In the apology letter, which was sighted by our correspondent, Lucky confessed that he misunderstood the workings of immigration and was rude to them.

He also promised to be of good conduct in the future.

The witness said: “His names on the ETC is Tony Lucky. He arrived aboard Turkish airline on Friday 14th December 2018. In the course of Immigration profiling, he became violent insisting that he has no reason to be asked questions about his details.

“He had no passport on him and was not ready to answer any question about the passport or give information about himself.

“When he was told that it is compulsory that he supply his detailed information and also live his finger prints on the back of the ETC, he became violent and tried to force his way out in order to evade immigration clearance. In the process, he landed a punch on one of my officers (ACII D. MAMMAN), which led to mouth bleeding. He virtually assaulted everyone that came his way.

“It was a herculean task before we were able to take him to the duty room. At the duty room, he realised his mistakes because the probable effects of alcohol he consumed on the flight had subsided and he wrote an apology letter for all his misbehaviour.”

Nigerianflightdeck is an online news and magazine platform reporting business stories with a bias for aviation and travel. It is borne out of the intention to inform, educate as well as alter perceptions with balanced reportage.
Previous President Buhari says new Abuja international terminal will sustain civil aviation growth
Next Yuletide: Safety and comfort are our topmost priority, FAAN says