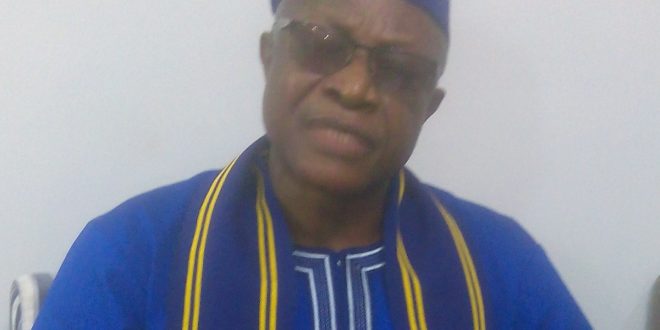 AERO-MEDICAL practitioner and aspirant for the Ekiti Gubernatorial elections, Dr. Owolabi Makunjola has said that all over the world aviation has led to developmental leaps and there is no way society can develop without aviation especially with the acceptance of air ambulances and Unmanned Aerial Vehicles (UAVs).

Speaking recently at a Leadership lecture of the University of Ibadan Alumni Association, Dr. Makunjola who is the first specialist fellow in Aerospace Medicine and Human factors of West Africa College of Physicians and US-based global Aerospace Medical Association lauded the use of drones stating that it was making life easy in developed countries.

The retired Senior Air Force Officer who spoke on the development of drones and air ambulances in the sector said the world as we knew is rapidly changing and that today drones are being used to transport people and offer medication stating that drones will bypass the exposure of anyone to danger,

“The world is changing, even all these ambulances that we are using on the road, no one is using them abroad. Drones are now being used to transport people, drones are now being used in Dubai to carry passengers. If you order things on the internet, drones will deliver it because the machines are taking over the jobs of human beings, human beings are just to monitor. America captured Osama Bin Ladin because of drones. They won’t expose anybody to unnecessary danger.”

“We need to change our minds on the usage of ambulance. An ambulance is what we use to carry somebody who requires speedy attention from where he is to where he can get comprehensive attention. The essence is speed and comfort of the passengers and aviation is the best sector to do this.”

“Australia is a very big country, bigger than Nigeria geographically, not in terms of population, but because they needed to treat people in different places, they adopted air ambulance. They started the first flying doctors service, using the aircraft. In fact, in that area, I’m completely under-utilized both when I was in the air force and even now because we are a nation where until my name changes to either Igbo, Hausa or Yoruba, I’m not relevant.”

“Until I come and beg them, I am not relevant, but who are we punishing? We are punishing ourselves. The time has come for all of us to use our best because Nigeria is a great country. “

Onn the state of the aviation industry, Dr. Makinjuola warned that if the country is not careful about the way it handles things, there may be a series a series of unfortunate disasters in the next eight to 10 years, as the country has done nothing to change its approach.

According to him, 80 to 90 per cent of air accidents are human factor related and only by training and indoctrination can people scale the hurdle of the limitations so as to ensure safety in the sub-sector.

“In aviation all over the world, 80 to 90 per cent of all problems; crashes and disasters are from what we call human factors and this is the area I specialize in. Human factor is about people who working in their natural environment whether politically, scientifically, educationally or technologically. Human beings need to know that to attain optimum efficiency and safety, by nature, we have certain limitations, which can make us fail and those things need to be changed by training, by indoctrination.”

“This is what we have been doing. So, it is that training that I do that makes me know the problem of Nigeria. During the government of President Olusegun Obasanjo, there was a national stakeholders’ meeting in Abuja when everyone in the sector were called to discuss developments in the sector.”

“Obasanjo even recognized my presence, but he didn’t even allow me to speak. What I would have contributed is what I have just given you, but he didn’t allow me to speak because of our impulsive and macho attitude. Once these matters are not addressed, it may take about eight to 10 years, we are going to have another spate of accidents because we are just deceiving ourselves, we have done nothing.”

According to him, core professionals have left the country because the system in the aviation industry is wrong and nothing has changed.

“In fact, most of the people that I have trained have left the country saying that if there will be no opportunities to reflect the changes that we know and we still engage in sharp practices, it is an accident waiting to happen because it is not a rocket science. We are wasting our time because nothing has changed. How many of the ministers in the country today are even knowledgeable about what to do?”

“Look, Nigeria is like a football field where the football itself has been thrown out of the football pitch and here you have two teams still playing with each other and the referee is playing with one of the teams. That’s the story of Nigeria. Go and write it down, unless we change, another spate of air disasters is still coming because we have done nothing.”

On how to avert the impending disasters, he called for the right people in position to drive the process and those people too should have the right people around them advising them in all spheres.

“What we should do is what President Obama told us in 2009 when he visited Accra, Ghana and refused to come to Nigeria. He said, you guys are busy looking for strong men, macho men to rule us. People who don’t know that they are limited are the disasters waiting to happen. I am limited no matter the fact that I have trained myself 40 years in this area, but I must surround myself with people that are also trained in the same field and give them the authority to be assertive and all of us work together.”

“So, aviation is the leading edge of every human development. There is no way any society can develop more than aviation. All these mobile phones we are now carrying now; we were using them in aviation about 40 years ago. What we are currently using in aviation now, we will start using them in the public, maybe in the next 50 years.”

“For instance, I can tell you the examinations I conduct for American pilots are internet based. You don’t need to be in the same space for us to perform the same functions. Aviation has many things that the society can learn from that is why no society has ever developed more than its level of aviation industry. You can even say that it is because our aviation is at the level it is that is why our society is like this.”

Nigerianflightdeck is an online news and magazine platform reporting business stories with a bias for aviation and travel. It is borne out of the intention to inform, educate as well as alter perceptions with balanced reportage.
Previous Stop the ethnic-tribal warfare!!!- Former Ghanaian President, Rawlings tells Nigerians
Next 41 Nigerians booted out of six European countries for immigration offenses