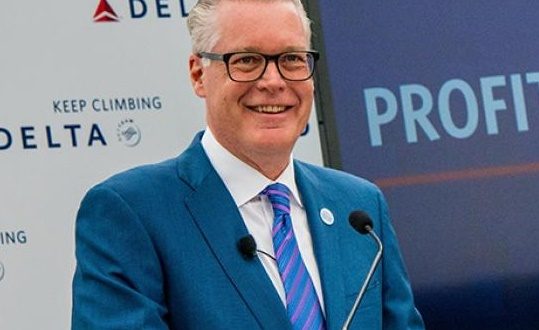 Adjusted earnings per share were up 16 percent compared to the prior year quarter, driven by revenue momentum, tax reform benefits and a four percent lower share count. Results reflect a $30 million negative impact from Hurricane Florence.

Delta’s chief executive officer, Ed Bastian said,“Our solid eight percent revenue growth, combined with flat non-fuel unit cost performance, helped offset 85 percent of the $655 million fuel cost increase in the quarter. These achievements are a testament to the strength of the Delta business model and the hard work of the Delta people, and I am pleased to recognize their performance with an additional $395 million toward 2018 profit-sharing, our commercial momentum and improved cost trajectory give us confidence that we are on a path to deliver continued top-line growth and expand margins as we move into 2019.”

Revenue Environment
Delta’s adjusted operating revenue of $11.8 billion for the September quarter improved eight percent, or $912 million versus the prior year. This quarterly revenue result marks a record for the company, driven by improvements across Delta’s business, including a nearly 20 percent increase in premium product ticket revenues and double-digit percentage increases in cargo, loyalty and Maintenance, Repair and Overhaul revenue.

Total unit revenues excluding refinery sales (TRASM) increased 4.3 percent during the period driven by strong demand and improving yields. Foreign exchange benefit of approximately half a point was offset by the impact of Hurricane Florence.

“We generated record revenues in the September quarter on strong demand across the business and a favorable yield environment. In the December quarter we expect total unit revenue growth of three to five percent, driving full year revenue growth to eight percent, the high-end of our guidance,” said Glen Hauenstein, Delta’s president. “The benefits of our brand, industry-leading network, and relentless focus on the customer are driving revenue growth, improving margins and accelerating the pace of our recapture of higher fuel costs.”

Total adjusted operating expenses for the September quarter increased $1.0 billion versus the prior year quarter, with more than half of the increase driven by higher fuel prices.
CASM-Ex was flat for the September quarter 2018 compared to the prior year period, a three-point improvement from the June quarter. Efficiency gains successfully offset cost pressures from higher revenue-related costs and product and employee investments.

“The September quarter marked an important inflection point in changing our non-fuel cost trajectory, and we expect to deliver on our full-year target of one to two percent non-fuel unit cost growth,” said Paul Jacobson, Delta’s chief financial officer. “Continued focus on cost control, along with incremental efficiency gains from refleeting and One Delta, give us confidence in our ability to keep our non-fuel unit cost growth below two percent next year.”

Adjusted fuel expense increased $655 million, or 35 percent, relative to September quarter 2017. Delta’s adjusted fuel price per gallon for the September quarter was $2.22, which includes $12 million of benefit from the refinery.
Adjusted non-operating expense improved by $30 million versus the prior year, driven primarily by pension expense favorability. The company expects 2018 full-year adjusted non-operating expense to be approximately $300 million, representing a $160 million improvement over prior year due to favorable interest and pension expenses, offsetting reduced partner earnings due to higher fuel.

Adjusted tax expense declined $221 million for the September quarter primarily due to the reduction in Delta’s book tax rate from 34 percent to 23 percent.

Cash Flow and Shareholder Returns
Delta generated $1.5 billion of operating cash flow and $655 million of free cash flow during the quarter, after the investment of $865 million primarily for aircraft purchases and modifications.
For the September quarter, Delta returned $566 million to shareholders, comprised of $325 million of share repurchases and $241 million in dividends.

Strategic Highlights
In the September quarter, Delta achieved a number of milestones across its five key strategic pillars.
Culture and People
• Received certification as a great workplace by the independent analysts at Great Place to Work for a third straight year, with 93 percent of employees proud to work for Delta, reiterating the importance of the Delta culture.

• Earned a spot in the transportation section of the Dow Jones Sustainability North America Index for the eighth consecutive year, as the first airline to offer carbon offsets to customers and the only airline to cap emissions at 2012 levels through purchase of carbon offsets.
Operational Reliability
• Delivered 97 days of zero system cancellations across the combined mainline and Delta Connection operations on a year-to-date basis, up 46 days from 2017 and exceeding the previous full-year record in the first nine months of the year.
• Achieved industry-leading operational performance with mainline on-time performance (A0) of 71.5 percent year-to-date; and top baggage performance as measured in the latest Department of Transportation report.
Network and Partnerships
• Achieved major milestones in the Delta/Korean joint venture including the completion of pricing harmonization, co-location of teams in Seoul and Atlanta, and broad alignment of commercial strategy.
• Signed a definitive agreement with WestJet that, after regulatory approval, will create a transborder joint venture serving more than 30 cities, which covers over 95 percent of U.S.-Canadian demand, providing enhanced offerings and more choice for customers.
• Continued Delta’s global and domestic expansion with the announcement of plans to expand access to London-Heathrow and Paris-Charles de Gaulle from key hubs and gateways including Detroit, Los Angeles, New York-JFK, and Portland, Ore; new Boston to Lisbon service; new Tampa to Amsterdam service; additional frequency to Tel Aviv from New York-JFK; and, new Honolulu service from Detroit.
Customer Experience and Loyalty
• Installed seat-back entertainment on its 600th aircraft, more than any airline in the world, giving more customers than ever convenient access to free in-flight entertainment on Delta Studio.
• Announced the launch of the first biometric terminal in the United States, transforming the customer journey with a seamless travel experience through the Maynard H. Jackson International Terminal in Atlanta.
• Launched personalized company sites to allow individual corporate travelers to stay up to date on benefits they receive through their company’s Corporate Sales Agreement with Delta.
Investment Grade Balance Sheet

• Received reaffirmation of an investment-grade credit rating by S&P Ratings, showing the confidence of the market in the sustainability and durability of the company.
September Quarter Results
Special items for the quarter consist primarily of mark-to-market adjustments on refinery fuel hedges and unrealized gains/losses on investments.

Nigerianflightdeck is an online news and magazine platform reporting business stories with a bias for aviation and travel. It is borne out of the intention to inform, educate as well as alter perceptions with balanced reportage.
Previous CMSL records N35m profit in 2017, declares steady growth since 2014
Next Air Peace takes delivery of 5th ERJ 145, set for Sokoto, Katsina flights