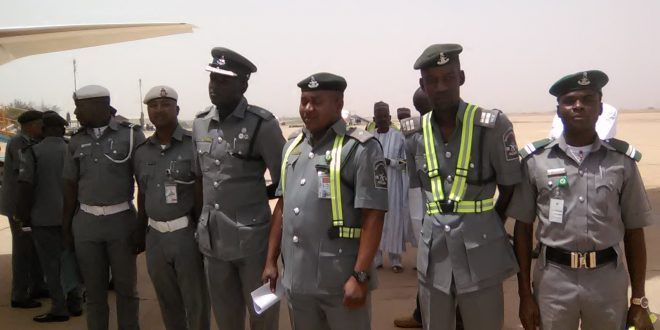 Some Customs officials at the tail of the aircraft.

IN the last 2 months the Nigeria Customs Service (NCS) stationed at the Seme border has impounded PMS, exotic cars and rice worth N1.06 billion from smugglers operating that route.

This is just as the command’s Customs Area Controller (CAC), Comptroller Mohammed Uba Garba said the command will further strengthen its anti-smuggling operations against trans-border crimes through intelligence-driven operations.

Taking journalists round some of the seizures at the command on Tuesday, Comptroller Garba made it clear that as a revenue agency, their responsibility in dealing with suspects was to arrest and detain and eventually hand over to the judiciary for prosecution.

The Seme Customs boss regretted that due to circumstances, the command could only meet up 76 per cent of its revenue target for 2018, but assured that this year would be a different ball game.

“With the inauguration and subsequent movement of the command to the Joint Border Patrol (JBP) of Seme-Krake (designed to operate as a modern border), the operations of the command will be further enhanced through cooperation, collaboration and regional integration by facilitating the free movement of persons and services, reduction of trade and logistic costs, increase in inter-regional trade, increase of government revenue by eliminating trade barriers, reduction of delays, operating cost and availability of baseline data for impact assessment.

“This is to assure the customs high command that this year’s revenue target allocated will not only be met, but will be surpassed provided that other factors remain constant”, the Controller stated.

With the JBP initiative, which he serves as its Chairman and his Benin counterpart as Co-chairman, Uba informed that the system provided a one-stop border post, which he explained meant “single entry, single exit”.

He added that with that arrangement, once a traveller entered the post, he needed not move from one office to another as both sides of the divide (Nigeria and Benin) would attend to him at the same time in an enclave where all the agencies were present.

He assured that all the agencies of government on both sides were on the same page on the initiative; hence the assurance of travellers of unhindered movement in the course of their businesses.

Nigerianflightdeck is an online news and magazine platform reporting business stories with a bias for aviation and travel. It is borne out of the intention to inform, educate as well as alter perceptions with balanced reportage.
Previous Otedola moves to acquire Forte Oil Upstream, Power Firm
Next NNPC records 219 pipeline vandalism in October 2018, puts incidents at 42.9 %