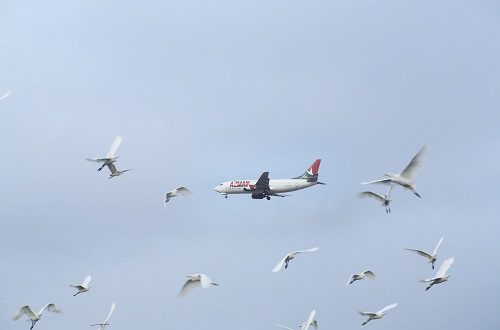 FOR months now, there has been little or no serious incident or accident related to bird strikes in and around Nigerian airports, particularly, the Murtala Muhammed Airport and that is saying something given the past incidents that have caused quite a melee for both aircraft operators and the airport service provider, the Federal Airports Authority of Nigeria (FAAN).

The current status is because FAAN has been busy with the recent discovery of habitats close to the aerodrome of the Lagos Airport where no fewer than 5, 000 birds of varying species mill during the day and rest at night only to cause damage to aircraft when they fly off, because the metallic, noisy birds now share their skies with them.

According to the airport authority, for over 20 years the birds have bred, hunted and fed in this habitat, multiplying exponentially as they have adapted the roost and have become comfortable; over the years their flight patterns into the airport suggests that some of the bird strikes suffered at the MMA may have been a result of this growing threat.

Bird strikes also known as bird ingestion (for an engine) or bird aircraft strike hazard (BASH) is simply a collision between an airborne animal (most likely a bird) and an aerial vehicle, usually an aircraft and this phenomenon has been happening since manmade aerial vehicles took to the skies.

It is also a phenomenon which cannot be predicted or intercepted but can be guarded against with the use of certain steps and for a while, airports around the country succumbed to these incidents which cost a lot of money to operators.

A source in the Wildlife Control and Hazard Unit of FAAN said bird strikes to aircraft are not new things, it is a term to describe when birds come into collusion with operating aircraft. “When there are birds and aircraft trying to use the same space, at the same time that is bound to happen.”

Fact is, world over, bird strikes are real and potentially dangerous situations and money guzzlers to airlines, in the United States alone, there are over 13,000 bird strikes annually and despite this they have found a way around this bird strike hazard and operate their aircraft.

Nigeria is not isolated from bird strike related incidents as between 1990 and 2019, there are about 700 reported cases bird strikes, many of which has had no adverse effect and between 2016-2017 there were no fewer than 27 bird strike incidents recorded across the country’s airports with 14 bird strikes encountered during take-offs and another 13 on landings.

However, being the agency responsible for ensuring safety at the airport against bird strikes and wildlife incursion into safety critical areas, FAAN is looking at making sure it eradicates or reduces this threat of bird ingestion to aircraft or animal incursion into the runway and so the need to disperse the discovered roost before it became worst.

Being a pilot and a frequent flyer along the MMA axis, the now managing director of FAAN, Captain Rabiu Hamisu Yadudu like other pilots have been aware of the roost for some time as they see it when they take off or land due to the fact that the habitat is directly under approach flight path of aircraft that are inbound runway 18L Murtala Muhammad Airport.

Pilots were always looking out for the birds’ habitat when they made their approach, fearing for the safety of their passengers and constantly asking what the airport authority is doing to prevent the worst from happening? Because while landing ingesting any of these birds may be hazardous.

When Captain Yadudu, was made Director of Airport Operations, he was already aware of the impact this roost could have on flights being a pilot and now in airport management, he understood the danger of the situation in terms of finance and most importantly lives, this spurred the need to be proactive in solving this issue.

When he was made Managing Director on May 20, Captain Yadudu had a meeting with the Wildlife Control and Hazard Unit and asked if they were aware of the roost, which they alluded to the positive but explained that the roost was not in FAANs property.

Yadudu scheduled a meeting with the property owners who agreed and allowed the Wildlife Unit access to tackle the problem.

When allowed access into the roost site, with the help of trained ornithologists in its Department of Wildlife Control, FAAN was able to identify the species of bird that create the problems for airlines and the things that attract birds to the airport and how to reduce or disperse birds from the airports, without causing them to hinder safe operations.

The source in FAAN’s Department of Wildlife Control said the agency had embarked on a project: Roost Dispersal Operation of Murtala Muhammed Airport, which led to ornithologists discovering and categorizing and dispersing several species of birds at that particular airport.

According to the Wildlife Control team, as much as five thousand (5,000) adult individuals of the 10 species, cattle egrets (Bubulcus ibis), roost nightly at the site. Birds start arriving to roost about an hour before sunset. Cattle egrets also nest at the site as nests and chicks were observed in abundance.

These birds were able to find suitable habitat because over years, the facility ground was taken over by diverse vegetation growth allowed to flourish undisturbed for long period.

This provided sufficient cover and protection to herons, majorly, which begin to roost and nest at the site. Certain features of the facility also ensure year round supply of water, supported growth of algae and plankton and gradually evolved into a wetland/marsh ecosystem supporting a large population of water birds

This in mind, the Roost Dispersal Operation’s approach was put in play with the realization that an all too sudden dispersal effort would almost definitely result in mass agitation of birds, and this may wreak havoc on all operations, probably bring down aircraft, as roosting birds tend to move around in flocks and so the plan hatched was to avoid this scenario as roost site are directly under inbound flight path.

Also, the team spokesperson said they did not want the birds to leave one habitat and move onto another to join others around the airport and so the operation was to create a sense of a gradually disappearing habitat over a period followed by active dispersal, safeguarding and finally repelling residual bird population.

“It was a delicate operation and one that could become risky, we have over 5,000 birds that have been there for a while and we have been recording bird strikes at MMA and these birds have been involved. We have had damaging strikes as airlines have lost engine and claimed to have lost equipment but none of these have brought down an aircraft.

“When you have two or three birds up in the air, the damage is minimal but when you have 5000 up in the air at once, that can result into something catastrophic. If you attempt to disperse them at once you are invariably telling them to go, all 5000 of them…imagine the consequences.

“As small and insignificant those birds may appear, when what has been described happens it may bring down an aircraft just like that.

On the methodology, the team carried out a six-month survey that not only characterized the bird population on the site but also their usage (what they come to do) on the site and during the months of cataloguing, it was discovered that of the 5,000 adult birds, the cattle egrets are the most populous species and of most concern at the roost.

“There were 4, 756 Cattle Egrets, 58 White faced whistling duck which    shelter within the swamp of aquatic plants and water trapped in the detention basin/ sedimentation tank of disused treatment plant; 8 African open bill stork on bare branches at the highest reaches of tallest trees at the treatment plant and a host of many others

“The timing of this operation was right because If we had waited beyond this time, there would be a population explosion of our aviary neighbors and we may have started having bird strikes here at the MMA more frequently.

“We couldn’t use the horn as all of them will take off and they may have to close the airspace, so we created a sense of a gradually disappearing habitat, using habitat modification making the habitat inconvenient for nesting and breeding. “

“We created bonfires, changed the environment. We broke the link between habitat and bird, letting them realize the roost will not be safe haven for them. Principally, we modified the habitat.

To ensure that the birds do not return, safeguarding procedures, which commenced simultaneously with those of active dispersal and continue after the cessation of the dispersal, involves set of actions planned to ensure roost is vacated permanently and also ensure secondary roosts are not established in the vicinity especially at or close to Murtala Muhammed Airport.

In other words, the Wildlife Control and Hazard Unit ensured that once they disrupted the metamorphosed habitat and made the place  not conducive, the birds had to leave but to make sure they did permanently, the actions taken needed to continue and in other locations too to ensure they did not converge in another nearby location.

As it stands in the last six to eight months there has not been a reported case of bird strike around the nation’s airports and this is because the authority took time to identify the problem and has done something different that turned this near-monthly occurrence around to the point of near eradication.

Nigerianflightdeck is an online news and magazine platform reporting business stories with a bias for aviation and travel. It is borne out of the intention to inform, educate as well as alter perceptions with balanced reportage.
Previous Schiphol airport rattled as pilot triggers hijack security alert in Amsterdam
Next DHR&A wins inter-departmental final as FAAN insists sporting activities stimulate body, mind