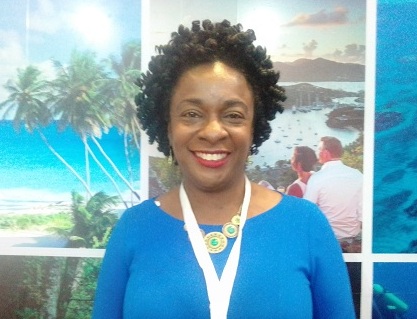 Director of Tourism Development of the Barbados Ministry of Tourism and International Transport, Dr. Kerry Hall

DIRECTOR of Tourism Development of the Barbados Ministry of Tourism and International Transport, Dr. Kerry Hall has stated that for deeper ties to be created between the Caribbean and Africa, direct air connectivity must be established.

She spoke to Nigerianflightdeck at the ongoing Akwaaba Travel Market holding at the Eko Hotels and Suites where she decried the current air services arrangement between Africa and the Caribbean through Europe and America, a 15-hour journey, describing it as ‘harrowing’

According to Dr. Hall, Barbados at the highest level is seeking to bridge that gap and has been talking to several African countries while waving the visa requirement to also establish direct connectivity.

She explained,” It took me 15 hours to get here (Nigeria). We have gone far in the air services agreement in Kenya, Ghana we haven’t gone so far but we understand that you can draw a straight line from the Caribbean to West Africa, the alternative of taking a 15-hour flight, I’m sure if it were a direct flight it will take four or five hours through the Atlantic to any of the West African nations.

“So, it doesn’t make sense and plus the fact that even though we lift the visa requirement, you’d still experience some challenges with the transit visas if you have to go through, London or the US. The only way this can be resolved is through direct connectivity, so I think that is where the focus should be in terms of direct connectivity. Some travel agents say that’s not gonna happen but I say no we want this to happen and we are determined at the highest level that that is gonna happen, it will happen.

“So we understand in other to boost travel back and forth from the Caribbean to Africa and Africa to the Caribbean one of the major obstacles or hurdles that need to be overcome is not just the waving of visa requirement but having that direct connectivity,” she said.

On the integration of Barbados and Africa, she explained there was a link between both peoples albeit one borne of slavery but despite the distance, the Caribbeans know their roots and are willing strengthen the ties.

“What prompted us to be here are so many factors but at the main factor where the government engaging at a Macro level, where the government of Barbados is moving swiftly to create travel linkage between itself and itself African counterparts and there have been several discussions like this within the past several months between Barbados and the President of Ghana and the President of Kenya have been to Barbados to see not only the Prime Minister but the entire cabinet to see if we can find areas of connection and collaboration to come to bilateral agreements, best practices and learn and share and collaborate with each other.

“So one area is air services agreements and another is the lifting of travel visas between Barbados and Africa this will increase tourism, business investment and trade be able to stimulate business in Africa

“As we all know, there is a missing link, a disconnect, I don’t think we have connected with each other over the years, the way we should.

“Knowing that Africa has a shared history, heritage or shared origin with the Caribbean, the same culture even though those origins are not so pleasant because we have connection with Africa through the enslavement of Africans as we are descendants of those enslaved but we understand our history and we are coming back home to embrace our brothers and sisters, we urge them to come to the Caribbean even if it was colonized by the British and Europeans we know our history from our ancestors.

Nigerianflightdeck is an online news and magazine platform reporting business stories with a bias for aviation and travel. It is borne out of the intention to inform, educate as well as alter perceptions with balanced reportage.
Previous EATECH becomes first Nigerian firm to get ISO/IEC 17025 accreditation
Next EgyptAir announces 50% discount on Business Class, extends codeshare with United