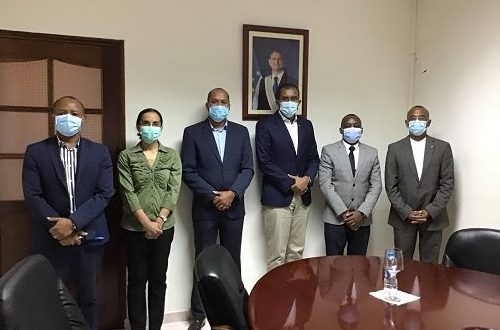 COMMISSIONERr, Banjul Accord Group Accident Investigation Agency (BAGAIA) Engineer Charles Irikefe Erhueh engaged the Minister of Tourism and Transport in Cabo Verde, Dr. Carlos Duarte Santos on the importance of the regional investigative agency and the need to be fully involved and attract other nations to be part of the laudable agency.

The meeting which held at the Conference Hall of the Ministry of Tourism and Transport dwelled mainly on capacity building and training to  enhance the expertise at the agency; it also focused in part on financing BAGAIA.

Engineer Erhueh who thanked the Minister and his cabinet members for hosting the meeting during this time the world is trying to wriggle its way from the clutches of the COVID-19 pandemic, highlighted to Dr. Santos and his team, the important role BAGAIA could and should play in the region.​

According to him, the importance of BAGAIA cannot be overemphasized and its functions with emphasis on strengthening and collaboration between Member States in respect to investigation of accidents and serious incidents,​ remain beneficial to the Cape Verde and other countries.

Also the BAGAIA Commissioner reiterated the need to enlist other African countries into the fold and create larger capacity not just for the region but the entire continent.

On capacity building in relation to On-the-job training, the BAGAIA Commissioner told  the Minister that to enhance those key proponents of accident investigation there is need to send their investigators for such trainings.

He further said that there is an investigation into a helicopter accident currently ongoing in Nigeria which the members of BAGAIA can be drafted in observer capacity mode to be part of the investigation team which will enhance their capacity in accident Investigation.

He also mused with enlisting possible training with the availability of funds or sponsor that BAGAIA has marshaled out but due to COVID-19 some of these have been put on hold.

On his part, Minister Tourism and Transport agreed to synergize with the Institute for the Prevention and Investigation of Aeronautical and Marine Accidents (IPIAAM) and Civil Aviation Authority with BAGAIA to move the Aviation industry forward in Cabo Verde.

The minister also expressed commitment to clearing up outstanding subscription to the Commission.

Dr. Santos agreed with the BAGAIA Commissioner on on-the-job training stating that it would further enhance the investigator’s capacity in the event of accidents or incidents.

On his questions on how BAGAIA has been able to achieve their plans during this period, at this juncture the BAGAIA Commissioner said this was bridged by virtual meetings and setting up various technical committees which actually yielded good results so far.

Nigerianflightdeck is an online news and magazine platform reporting business stories with a bias for aviation and travel. It is borne out of the intention to inform, educate as well as alter perceptions with balanced reportage.
Previous International travel restart takes centre stage as first flight into MMIA is captured
Next ICPC inaugurates FAAN anti-corruption, transparency unit