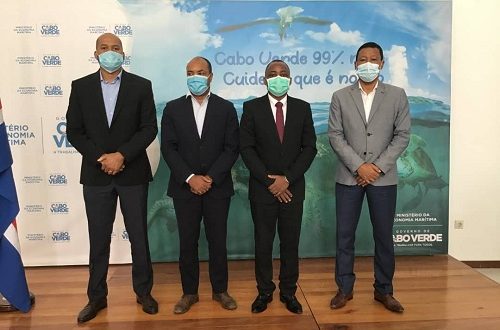 CABO VERDE’S Minister of Maritime and Economy, Dr. Paulo Gerida is considering an idea canvassed by the Banjul Accord Group Accident Investigation Agency (BAGAIA) to increase training of personnel in its Institute for the Prevention and Investigation of Aeronautical e Maritime Accidents (IPIAAM), so investigators can be drafted from the body to investigate aviation or maritime accidents when the need arises.

This is just as BAGAIA is seeking massive capacity building in the region with emphasis on new blood to learn from experienced.

These were some key discussion points when the Minister hosted the Commissioner of BAGAIA, Engr. Charles Irikefe Erhueh and his team in the conference hall of the Ministry of Maritime Economy in Predio ex-Comando Naval, Mindelo, in Sao Vincente in the Republica de Cabo Verde at the weekend.

Introducing BAGAIA and its feats so far, the President of IPIAAM, Engr. Mario Margarito Gomes explained how the commissioner has been projecting the agency to gain grounds among member states and all over Africa.

According to him, bringing the activities of BAGAIA to the limelight as the commissioner is doing is one way to create awareness of the agency’s activities in the region and garner more support to establish a stronger regional body with resources to tackle incidents and accidents anywhere they are required.

The IPIAAM President also recounts successes that BAGAIA has been able to make so far by the way the BAGAIA Commissioner put his wealth of experience into use.

Engineer Erhueh, the BAGAIA helmsman on his part, articulated the roles of BAGAIA to the Minister, explaining that IPIAAM, being a dual-modal accident Investigation body is commendable and that BAGAIA as a Regional body’s aim is to ensure that every institution, including the IPIAAM works in line with the International Civil Aviation Organisation (ICAO) Standard and Recommended Practices (SARPs).

Furthermore, the BAGAIA Commissioner also stated that although Investigation processes are the same either in the Aviation or Maritime sectors as the case may be, that accidents or incidents are not the same and so expertise and experience comes in to ensure they are investigated to produce recommendations to learn from and better the entire system.

He went  further to state that  in capacity  development  whether in  the Maritime or in the Aviation sector of IPIAAM, the investigators should be prepared to be drafted into any investigation which in turn provides much needed experience for the individual and in turn, the organisation.

On capacity building, Engr. Erhueh explained that human capacity building in IPIAAM and the region  is low and  posited that there is need to have more hands especially engagement of young ones who can learn from the experienced hands and be trained in accident Investigation for the purpose of prevention and forestall future recurrence of similar accident or incident.

The Cabo Verde Minister and President of IPIAAM who agreed also concurred  that the move will enhance  capacity of their personnel and expressed readiness to encourage such in the system.

Reacting further, Dr. Gerida appreciated the presentation of the BAGAIA Commissioner saying he has a broader perspective of the dealings of BAGAIA and its role in fomenting safety policies in the aeronautical sector.

Nigerianflightdeck is an online news and magazine platform reporting business stories with a bias for aviation and travel. It is borne out of the intention to inform, educate as well as alter perceptions with balanced reportage.
Previous FG rescinds approval to Emirates Airlines, UAE carrier’s restriction takes effect from Monday Sept 21
Next Updated: NCAA says lack of good business structure, management styles constitute major problems for Nigerian airlines