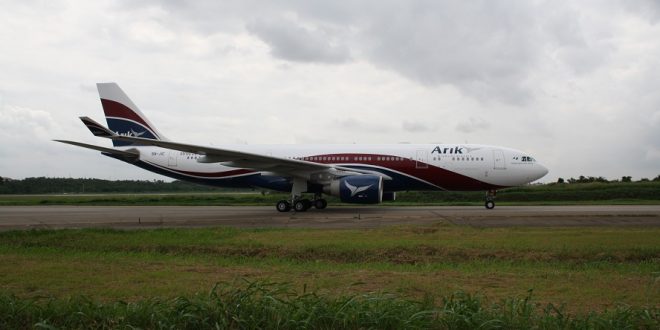 As Jet A1 scarcity looms, Ojikutu says marketers are devious, calls for repair of pipelines

Arik Air last Friday forewarned air travelers of severe aviation fuel (Jet A1) scarcity as it said that oil marketers started rationing the product’s supply to airlines giving limited stock at the depots as the reason.

This is just as Managing director of Centurion Securities, Group Captain John Ojikutu has blamed oil marketers of insincerity, stating that there is no Premium Motor Spirit (PMS) scarcity and there is scarcity of kerosene and jet-A1 even when government has given an open door to anyone who wants to import.

He also restated that repairs could be made to the pipelines that bridge fuel from Ejigbo and Mosimi to Murtala Muhammed Airport that consumes 70% of the aviation fuel suggesting that airlines could do this since the NNPC is not willing.

Arik Air had in statement said that the situation is critical in Lagos and Abuja, its operational hubs and the airline has warned that if the situation is not addressed as a priority by the marketers, more flights could be delayed or cancelled.

The airline in their statement also notified that it is the largest consumer of aviation fuel in Nigeria operates more than 120 daily flights and its daily fuel requirement is about 500,000 liters. This means that Arik Air will be most affected by the scarcity and delay in marketers to source and deliver fuel to the airlines.

The airline has therefore appealed for the understanding of passengers as it grapples with the JET A1 scarcity. Where flights are likely to be delayed, the airline will notify passengers through SMS. In case of flight being cancelled due to limited supply of fuel by marketers, passengers will be accommodated on first available alternative flight at no cost.

Group Captain John Ojikutu in his reaction mail said there have been evidence that some marketers were selling kerosene as jet-A1 especially where there have been no sufficient established specifications for jet-A1 by Nigeria Civil Aviation Authority (NCAA).

According to him, Kerosene and Jet-A1 are both cheaper to import than PMS blaming the looming scarcity on the works of certain cabals in the industry.

Ojikutu said, “Just as the marketers are not sincere, the operators too are equally guilty. Ask yourself, why is there no PMS scarcity and there is scarcity of kerosene and jet-A1 even when govt has given an open door to whoso ever wants to import?”

He continued,”There have been evidence that some marketers were selling kerosene as jet-A1 especially where there have been no sufficient established specifications for jet-A1 by NCAA. Kerosene & Jet-A1 are both cheaper to import than PMS. It cannot b a problem of foreign exchange for as long as importers of other petroleum products are not complaining. What is happening is the work of the cabal in d industry.”

“It has bn suggested severally that d airlines could repair the pipelines that bridge fuel from  Ejigbo and Mosimi to MMA  airport that consumes 70% of d aviation fuel if NNPC is not willing to do it. The aim is to reduce the cost of bridging the supply with hundreds of tankers and the cost of demurrage on them at the airports.”

“These are additional cost to the cost of aviation fuel. Unfortunately, these tankers owners are very powerful with their allies in government that is why the pipelines that got damaged since 1992 is not repaired and that is a reason why the railway line project by Oando to transport fuel from Apapa to other parts of the country may not come on stream.”

“Unfortunately too, it seems to me that some airline operators have some unseen hands in the mess; they pretend to be helpless but their voices are not loud. They go talk to government officials in low voices and they all pretend they have no solutions to the problem. “

“First line solution? Find those who own the tankers, those who import fuel and some owner s of defunct airlines with AOL that have no aircraft flying but still have access to fuel with the marketers and sell at ridiculous price to operating airlines.”

Nigerianflightdeck is an online news and magazine platform reporting business stories with a bias for aviation and travel. It is borne out of the intention to inform, educate as well as alter perceptions with balanced reportage.
Previous Dana Air echoes vow to superior on-time performance
Next Delta Air Lines deploys state-of-the-art baggage tracking tech in Nigeria