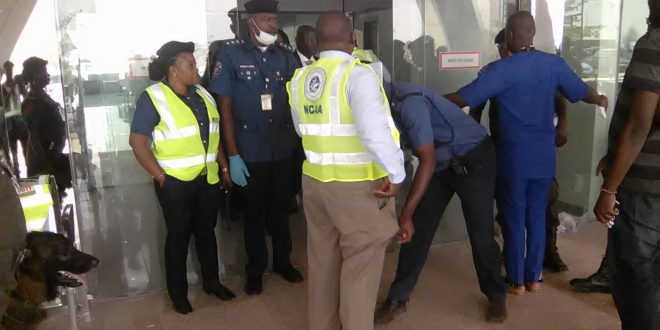 Archive picture: Security beefed up at the Kaduna Airport, as Aviation Security carry out a search of those coming into the terminal

This is just as the group strongly advised that to eliminate inter agency rivalry, a review of the airport security architecture to cover elements of the various security agencies needs to be carried out.

Minister of State, Aviation, Senator Hadi Sirika at the just concluded 5th Aviation Stakeholders’ Forum announced that in a matter of months Federal Airports Authority of Nigeria (FAAN) Aviation Security will be licensed to bear arms at airports across the country to heighten security following various security infractions that have happened around the country.

The ART expressed its support for the approval in its statement delivered by the group’s PRO, Mr. Olumide Ohunayo where it contended that:

“the primary objective of AVSEC is the protection and safety of passengers, crew, ground personnel, aircraft and facilities serving civil aviation against act of unlawful interference in sterile areas of airport therefore the participation of other security agencies are inevitable in the airport security network.”

“Consequent to this approval we strongly advise a review of the airport security architecture to cover elements of the various security agencies which will now form the new organogram.”

The group however said control of the security agency around the airport should be under the operational command of the new apparatus.

The ART said,”Please note that they administratively remain under their parent agencies but under the operational command and control of the new Airport Security Architecture.”

“Furthermore, ART as a body will advise that selected men to bear arms be properly trained and tested in rudiment areas of arms handling, standard armoury and trained armourer for safe keeping of ammunitions while necessary procedure for issuance, retrieval and accountability of expended rounds if necessary be put in place. ”

The group recalled, “in the 90s we delegated and rotated the heads of security agencies serving in the airports to supervise and control night operations which is akin to the United States TSA model.”

“Security threats have evolved and we as a nation are challenged to find the nexus and best fit security architecture as our security challenges cannot be the same with other nations, therefore we cannot lift models hook line and sinker.”

Nigerianflightdeck is an online news and magazine platform reporting business stories with a bias for aviation and travel. It is borne out of the intention to inform, educate as well as alter perceptions with balanced reportage.
Previous Dana Air recounts story as it celebrates 10 years of service to Nigeria
Next Another 116 Nigerians repatriated from Libya