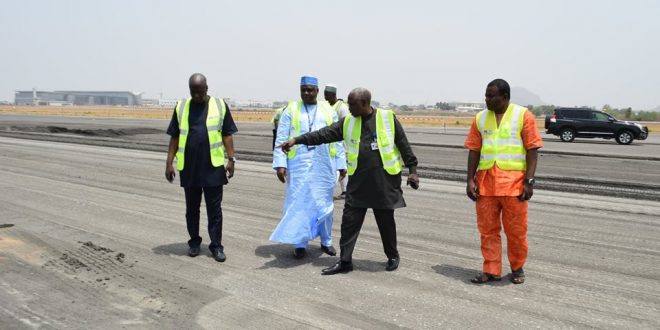 NATIONAL Secretariat of the Association of Nigeria Aviation Professionals (ANAP) has implored the Minister of State, Aviation, Senator Hadi Sirika and his team to ensure the completion of repairs of the Nnamdi Azikiwe International Airport (NAIA) runway within the stipulated six weeks mandated.

In a press statement made available to NigerianFlightDeck over the weekend the union stated that it supported the project because it feels that the closure of the airport was based on safety and not motivated politically  but asked government to ensure the completion.

In the statement signed by Secretary General, Abdul Rasaq Saidu titled commendation on the upgrade of the Kaduna Airport to Category 9 by the Federal Government, the association also applauded the tireless effort of the Minister and his team to upgrade Kaduna Airport to Cat 9 to meet foreign airlines needs.

The statement read,” the National Secretariat of the Association of Nigeria Aviation Professionals (ANAP) a trade union hereby wish to congratulate and sincerely commend the honorable Minister and all other chief executive officers of parastatals and in particular, the Managing Director of the Federal Airports Authority of Nigeria (FAAN), Engineer Saleh Dunoma and his team who worked tirelessly round the clock to ensure that there was hit-free takeoff of Kaduna Airport as cat 9, it is honestly commendable.”

“The successful takeoff of Kaduna Airport as a Cat 9 Airport is a testimony that Nigeria is capable of rising above her challenges if all hands are patriotically put on deck. We therefore call on Nigerians to have faith in the Nigeria project for this is the way to move the country forward.”

Comrade Saidu said that ANAP’s stand is based on professionalism for which it is known to have as a responsible and responsive registered Trade Union Organization for the professional and administrative cadre of the  industry.

He stated further that it will compliment government in uplifting the industry to great heights and offer professional advice when necessary.

Nigerianflightdeck is an online news and magazine platform reporting business stories with a bias for aviation and travel. It is borne out of the intention to inform, educate as well as alter perceptions with balanced reportage.
Previous Medview Airline adds Lagos-Kano-Kaduna to its route Network
Next NAMA expresses readiness to land aircraft at zero visibility