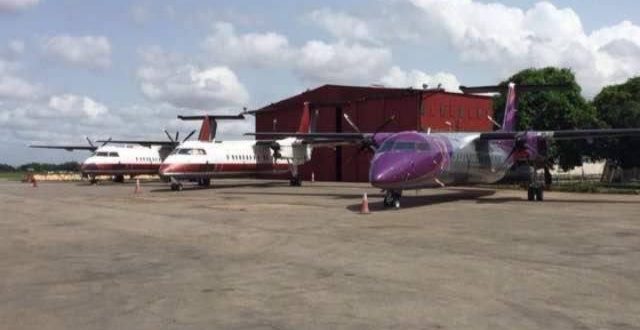 The aircraft in contention: two Dash-8 Q-300s with registration 5N-TBB with MSN 613 and 5N-TBC with MSN 614 parked at a hangar shed

TOPBRASS Aviation has filed contempt charges at a Federal High Court in Lagos allegedly to stop individuals and certain aviation parastatals who have flouted an existing order of the court on a ruling concerning two aircraft, a Bombardier Dash 8 Q300 with MSN 613, registration number 5N-TBB and Bombardier Dash 8 Q 300 series with MSN and with registration number 5N-TBC

According to Captain Roland Iyayi, Topbrass CEO, the airline had secured a court injunction at the FHC presided over by Justice C.J Aneke in suit no: FHC/L/CS/1658/2015 which restrained all the defendants from tampering with it’s assets, two Dash-8 Q-300s with registration 5N-TBB with MSN 613 and 5N-TBC with MSN 614.

A certified True Copy of the plaintiff’s prayers made available to journalists revealed that  Top brass had approached the court praying that it should give an order for the preservation from the repossession of two Bombardier Dash 8Q 300 airplanes leased by virtue of an Aircraft Sublease Agreement dated August 26, 2011with the first right to purchase to the plaintiff by virtue of a Purchase Option Power by the Hour Transfer, Ferry Flight  and Additional Services Letter dated August 26,2011 presently being operated by the plaintiff at the General Aviation Terminal  at the Murtala Muhammed Airport or within any other airport within the jurisdiction of the honourable court  pending the determination of the substantive suit.

Topbrass also seek an order restraining the 1st defendant, their agents, attorneys, officers assigns from taking possession and deliver of the 2nd and 3rd defendants pending the hearing of the substantive suit.

The airline also seeks an order of injunction restraining the 4th defendant; NCAA from granting clearance for the repossession or de-registering the 2nd and 3rd defendants pending the hearing and determination of the substantive suit.

He added that Topbrass prayers were granted and that the matter was adjourned till February 9, 2016.

Speaking further, Iyayi stated that on July 11,2018, Topbrass went back to the Federal High Court  presided over by Justice M.S. Hassan,asking the court to extend the orders made  by the court on December 2, 2015 asking the court preserve  the 2nd and 3rd defendants from repossessing to NCAA,FAAN,NAMA and Capt. Baba Muhammed cited parties pending the determination of the substantive suit.

The Judge held that the first injunction granted by Justice Aneke .J. remain valid and binding on all parties in the suit as well as any party who may want to tamper with the subject matter of this suit.

The court ordered that the said order be served on all the parties in the application and the case was adjourned till September 25, 2018.

Explaining in details the crux, Iyayi said Topbrass has invested over $12,000,0000 on the finance purchase agreement it entered into with Seagold for acquisition of the assets and were being frustrated allegedly by those served the contempt charge.

“When Topbrass engaged with Seagold international, we entered into a finance purchase agreement with Seagold, separate and distinct from an operate lease agreement. In this particular context, rather than pay a standard operating lease fee of $80,000 per aircraft per month at the time, Topbrass was paying$210,000 per aircraft per month and the tenure of the lease was for 24months. ”

“During the period of the lease, Topbrass provided Seagold with a letter of credit to the tune of $1.3million to forst all any defaults in terms of lease payment. At the same time, Topbrass signed and IDERA, Irrevocable dereigstration Authority in Favour of Seagold such that should we default in the 24 month period Seagold would have had an unfettered access to the aircraft for repossession. Fortunately over the 24month period, there was no default.”

Trouble started when Seagold allegedly in collusion with Captain Baba Mohammed reneged on an agreement reached for the aircraft acquisition trying to repossess it, which led Topbrass to go to court seeking redress.

However, despite the subsisting court order NCAA had  removed the aircraft from the NCAA register, and an Engineer allegedly working for Captain Baba simply named Saturday had physically erased the registration number of both aircraft.

Despite the ruling of the court, FAAN in a Letter on September 5, 2018 with Ref; FAAN/1600/001331 signed by Dr. Clifford Omozeghian, had released the aircraft to Seagold Investment Limited which had gone on allegedly to move the aircraft, despite the court order,  to the Aero Maintenance Hangar where it currently sits.

General Manager Public Affairs, Sam Adurogboye, when contacted said the Topbrass and all the parties would meet in court, stating that they were not afraid of being sued.

“I cannot comment on the matter, only to say that we are the CAA and we are for everyone and are not biased but since the matter is in court, there is a process and a bailiff that will execute the court’s ruling. I cannot be discussing this in the media, since he is in court, the process should take its cause, we are not afraid to be sued or to sue,” he said.

Nigerianflightdeck is an online news and magazine platform reporting business stories with a bias for aviation and travel. It is borne out of the intention to inform, educate as well as alter perceptions with balanced reportage.
Previous Dana Air commences ‘Smart Booking’ on WhatsApp
Next Air Peace inks deal for 10 brand new Boeing 737 MAX, becomes first in West Africa