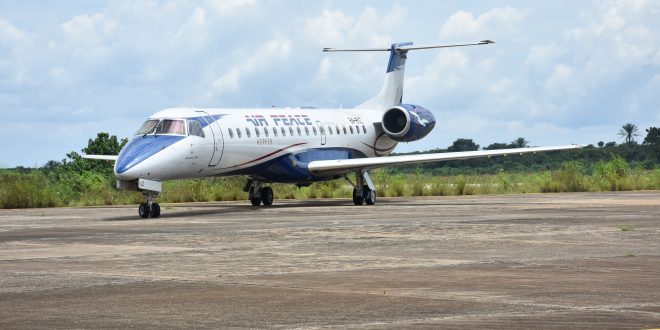 MANAGEMENT of Air Peace at the weekend reacted to insinuations that the airline has a discriminatory fare regime against the South East asking those championing these orchestrated attacks on the airline on social media to desist because they are ignorant of how ticket fare pricing is done.

According to the airline, the fuller the aircraft gets the higher the fares paid on all routes as it is not particular to the South East or any region for that matter stressing that comparing an Economy fare on the Kano route to a Business Class fare in the South East is nothing short of ignorance and smacks of mischief.

“These fares are loaded into the system for all Air Peace destinations- North, East, South and West. No discrimination. If the first 10 seats of N23,000 fare finishes, the system will automatically start showing the next fare which is N27,500. If the allocated seats on this are booked, it will migrate to the next until it gets to the last 14 seats pegged at N60,000.

“As the aircraft gets fuller, the higher fares start showing up. The Eastern routes, because of traffic, get sold out faster than some places thereby showing higher fares faster. But the other destinations, though slower, will also pay the same higher fares as they get fuller too.

“It is highly mischievous of anyone to be accusing Allen Onyema and Air Peace of ethnic favouritism. It has become habitual for people to try to make themselves popular by attacking the airline.

“To feather their parochial interests, these propagandists say we favour the North. They published on social media a fare of N95,000 to Owerri and a fare of Kano showing N35,000 for the same date. Quite misleading.

“The N95,000 fare is is not our Economy fare but our Business fare. It is deceptive for anyone to deliberately bring out our highest Business fare for Owerri and juxtapose it against a Kano Economy fare selling at the time, thereby making the unsuspecting reader to think that the Owerri passenger is paying N95,000 for the same class of ticket which the Kano person was paying N35,000 for.

“Our fares are the cheapest in Nigeria for our type of aircraft. Even in Christmas season, we do not increase fares. The N60,000 Economy ticket is there all year. During Christmas, you fly empty planes back to Lagos from the South East, yet we keep to our all year round Economy fare of N60,000.

“Air Peace came on board when there was paucity of flights in the South East and provided several flights, making transportation easier for the Easterners. The airline also has in its employ over 2000 Igbo people in an industry where they were not adequately represented before our entry.

“Allen Onyema established Air Peace not to enrich himself but to provide jobs for the critical mass of unemployed Nigerians. When mischief-makers think of running down Air Peace, they should consider these Nigerians and the impact the airline’s operations have had on the economy.

Nigerianflightdeck is an online news and magazine platform reporting business stories with a bias for aviation and travel. It is borne out of the intention to inform, educate as well as alter perceptions with balanced reportage.
Previous FAAN refutes explosion claims at Maiduguri Airport
Next Heritage Bank, CBN to disburse N41bn to farmers for wheat production in 14 states