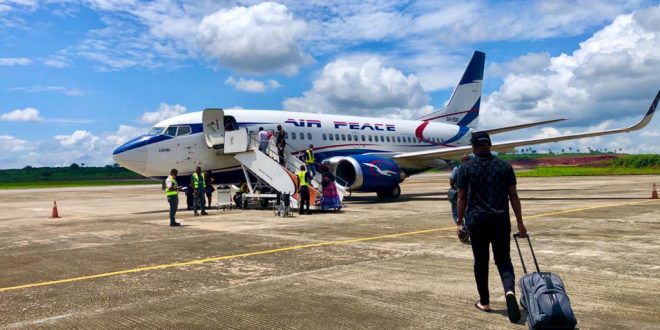 AIR Peace has expressed apology to customers whose Abuja-Lagos flight was delayed on Thursday night as they arrived Lagos some minutes past midnight and became stranded at the airport.

The airline management said it was never its intention to delay the said flight but the delay became unavoidable consequent upon operational concerns which had to be addressed at the time.

“We are extremely sorry that our Abuja – Lagos flight had a delayed departure on Thursday night. We regret all the inconveniences experienced by the passengers and restate our commitment to offering superior flight services”, the airline stated.

Air Peace expressed gratitude to the flying public for choosing the airline and assured them of improved service delivery.

Nigerianflightdeck is an online news and magazine platform reporting business stories with a bias for aviation and travel. It is borne out of the intention to inform, educate as well as alter perceptions with balanced reportage.
Previous AIB-N mandated to probe military aircraft crash in Kaduna
Next Captain Mshelia commends NCAA for apprehending illegal charter operator; calls for stricter sanctions