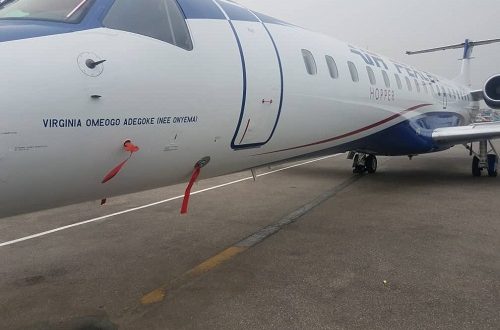 The aircraft with Serial numbers 145379 (5N-BXG) and 145486 (5N-BXF) were delivered in Kingman, Arizona on 3rd October with sales facilitated by Skyworld Aviation who are a leading independent regional aircraft marketing agent

Skyworld Aviation acted on behalf of a U.S based regional aircraft sales and leasing firm for whom we have previously arranged a sale of an ERJ 170, two CRJ 700 leases, two further ERJ 145 sales and the sale of an AE3007A engine and APU and expresses delighted to have worked with Air Peace on this transaction while looking forward to an ongoing relationship in supporting the Nigerian airline with future fleet arrangements.

Air Peace’s acquisition of the Embraer jets was borne out of a resolve to provide seamless flight services on the domestic, regional and international routes as well as extend the reach of its operations to many more un-served and under-served destinations under the airline’s no-city-left-behind project.

The ERJs are under the airline’s subsidiary, Air Peace Hopper set up to organize plans to democratize air transport and create massive job opportunities, connect people and business and leisure destinations, help in growing the economies of Nigeria and other nations we operate in and make Nigeria proud overall in the global aviation community.

Nigerianflightdeck is an online news and magazine platform reporting business stories with a bias for aviation and travel. It is borne out of the intention to inform, educate as well as alter perceptions with balanced reportage.
Previous Over 50 Nigerian travelers yet to get baggage from RwandAir two days after
Next Updated: Air Peace reacts to $20 million fraud indictment, ‘it’s false and I’ll see them in court’