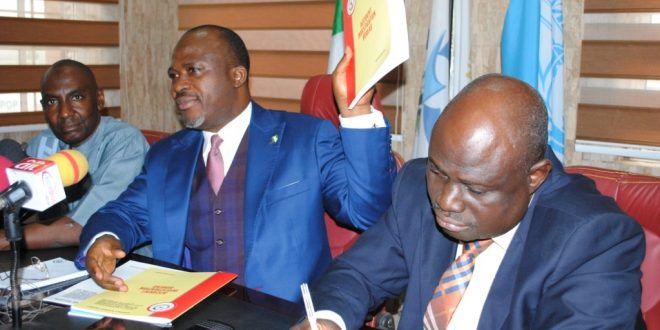 Commissioner of the Bureau, Engineer Akin Olateru made this known while revealing that a total of three accident reports are out in public domain, this brings the number of aircraft accident investigation to seven in eight months.

According to Olateru, the investigation into the NPF crash that killed all four passengers including a DIG discovered series of discrepancies and non-compliance with Nig.CARs on the NPF investigation which includes that the pilot of the helicopter flew with an expired medical certificate as at the time of accident, as well as an expired simulator recurrency.

Olateru stated further that the co-pilot was not type rated on the helicopter (Bell 427) while the engineer that released the aircraft prior to the flight had no type training and type rating on the aircraft type.

Olateru said that the Bureau made three Safety Recommendations which were,”4.1 Safety Recommendation 2017-001. NPF Air-Wing should provide the proper funding, conducive working environment, develop and implement a robust training programme for its technical/operational personnel, with adequate supervision and approved equipment to enhance safety.’

“4.2 Safety Recommendation 2017-002. NCAA should ensure that NPF Air-Wing complies with its AMO requirements. 4.3 Safety Recommendation 2017-003, NCAA and Department of Petroleum Resources (DPR) should launch an independent inquiry into Aviation fuel quality in Nigeria. The resulting report should focus on the vulnerability and risk of each step in the distribution process. This should yield firmer regulatory oversight mechanism that ensures international quality of aviation fuels used in Nigeria.”

The Bureau stated also that the Police Air-Wing, Nigeria Civil Aviation Authority (NCAA) have accepted and are enacting the safety recommendations to forestall any repeat

“The Police pilots and engineers have been type-rated on the police fleet despite the inadequate funding from the government appropriation while many are still on the waiting list to be type-rated. The Police Air-Wing accepts Safety Recommendation 4.2 (2017-002) Approved Maintenance Organization (AMO): “The Police Air-Wing had been able to obtain from the NCAA a valid AMO in compliance with the regulation.”

“The NCAA also accomplishes its surveillance on the certified entity to ensure their continuous compliance with the regulatory requirements.”

The Bureau also released the report on the  Incident at Nigerian College of Aviation Technology (NCAT) involving a Tampico TB9 aircraft with registration 5N-CBC which occurred at Zaria Aerodrome, Kaduna, Nigeria on the 6th of October, 2008.

According to the commissioner, the causal factor of that crash was the inability of the student pilot to maintain directional control of the aircraft after touchdown.

He further highlighted contributory factors to include the fact that: The student pilot lost concentration while retracting the flap and trimming the aircraft during the landing roll preparatory to the next take-off. The student was fatigued as he had done six landings with the instructor and four solo landings.  The increased workload due to the “un-gated” flap control knob assembly.”

Speaking on the final released report, being the ground collision of Air Peace aircraft, Olateru stated:

“As a preliminary point and for the first time in history of the Bureau we are releasing what we call AIB Bulletin on the Ground Collision incident involving two aircraft belonging to Air Peace Airlines Limited: Boeing 737-500 with registration 5N-BQR and Boeing 737-300 with registration 5N-BQP, which occurred close to Bay 4 of the Domestic Terminal 1 of the Murtala Muhammed Airport, Ikeja, Lagos, Nigeria on the 20th of April, 2017.”

“This is not an accident or serious incident in accordance with Annex 13 ICAO, but in accordance to the Civil Aviation (Investigation of Air Accidents and Incidents) Regulations 2016 of the Bureau, but being a safety house we are, we decided to investigate this incident because of the safety lessons to be learnt. As a way of moving forward on this initiative, we plan on increasing our safety awareness through stakeholders interactive sessions and the media houses. “

Nigerianflightdeck is an online news and magazine platform reporting business stories with a bias for aviation and travel. It is borne out of the intention to inform, educate as well as alter perceptions with balanced reportage.
Previous Air Peace rewards loyal customers with free tickets
Next Aviation industry deployment controversies not worth it- stakeholders