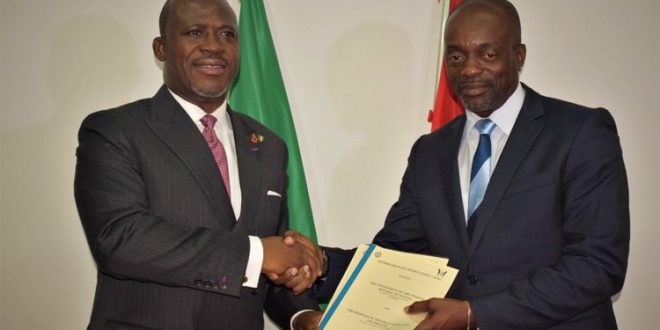 This is just as the bureau has pinpointed the cause for the runway excursion attributing it to the presence of birds on the runway, which caused the take-off to be rejected at a speed above decision speed V1, which was inconsistent with CAVOK’s Standard Operating Procedures (SOP).

According to the report, on 29th July, 2017 at about 0905hrs Antonov aircraft Model AN-74 TK-100, registered UR-CKC, owned by Swift Solution FZC, operated by CAVOK Airlines LLC overrun runway 29 during a rejected take off at Sao Tome International Airport.

The report stated that the Captain, the First Officer, the Flight Engineer and 2 maintenance Engineers on board were rescued unhurt except the Flight Navigator who sustained an injury to his left foot and some minor bruises.

The bureau, in its report however indicated some other contributory factors including failure of the crew to deploy interceptors (speed brakes/spoilers), inadequate flight crew training on details of rejected take-off procedure scenarios, omission of the take-off briefing in CAVOK’s Normal Operations checklist and poor Crew Resource Management (CRM), especially in a multi-crew flight operation.

On its safety recommendations, the AIB recommended that Instituto Nacional de Aviacao Civil (National Civil Aviation Authority of STP)should :
* improve the habitat management programme (including reduction or elimination of trees, shrubs and other plants which provide food, shelter or roosting sites for birds)

*Should enhance its aerodrome grass management appropriate to the prevalent species and the degree of risk that they pose.

*Should liaise with local inhabitants to limit the attraction of birds to fields (in the vicinity of the airport).

*Should adopt and extend Runway End Safety Area to conform to ICAO standards.

*Should include the information about the ravine at the end of RWY 29 into the AIP and Send it as Notice To Airmen (NOTAM).

The Bureau further recommended that Ukraine Civil Aviation Authority should enhance its oversight functions by reviewing all safety related items pertinent to operators’ checklists and manuals.

Finally it advised CAVOK Airlines to review its Rejected Take Off (RTO) training syllabus to incorporate robust RTO training plan for both initial and recurrent aircraft type simulator training and assessment to include unexpected scenarios and stop-and-go decision making.

The Commissioner/CEO, Engr Akin Olateru who led his team to submit the final report of the accident said it was very significant as for the first time in the history of Accident Investigation Bureau, accident investigation was handled by the Bureau on behalf of another state or a regional body.

The delegates visited the Nigerian Embassy and were received by the Charge De affaire, Mrs Faith. Ekwekwuo.

She welcomed and appreciated the good job the Bureau did to have helped investigate the air accident and release of the final report. She also commended the Bureau for maintaining a good relationship with the Sao Tome authorities.

Nigerianflightdeck is an online news and magazine platform reporting business stories with a bias for aviation and travel. It is borne out of the intention to inform, educate as well as alter perceptions with balanced reportage.
Previous Tony Elumelu Foundation opens 5th Entrepreneurship Programme application cycle on Jan 1st , 2019
Next ICAO inaugurates FAAN ASTC, signs MoU on aviation security with British government