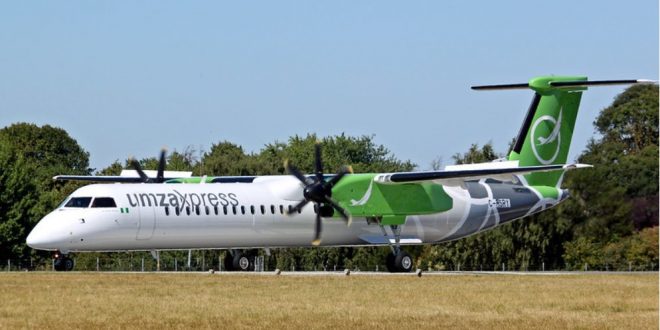 Having taken delivery of one of the first set of two Dash-8 (Q-400 ) aircraft on August 11, 2022 in a bid to restart operations, questions have now started flying with regards the origin of the aircraft Aero is about to recommence operations with and why it is painted in NG Eagle’s livery.

Aero Contractors, had announced that a Nigerian registered Q-400 aircraft owned by UMZA Air will be operated under a joint venture agreement between both parties.

The above is cheery news though there are registration documents at aircraft identification and ownership site, planespotters.net which indicate that Umza Express owns one De Havilland Canada DHC-8 Dash 8  and is part of NG Eagle sired by the Asset Management Cooperation of Nigeria ( AMCON), which was on the verge of receiving it’s Air Operators’ Certificate ( AOC) only for the process to be stopped without further explanation.

The Managing Director of Aero Contractors, Capt. Abdullahi Mahmood while taking delivery of the single Dash 8 said: “We are pleased to inform our customers and stakeholders of the delivery of this aircraft under a joint venture agreement with UMZA Air

“Once we are ready to commence operation we shall officially inform the Nigerian Civil Aviation Authority (NCAA).

“We shall announce our resumption of services with a new schedule soon once we are ready.”

A source who spoke off record to NigerianFLIGHTDECK on the livery of the aircraft however said, “…the UMZA aircraft were supposed to be used for NG Eagle, but since AOC was not issued they’d be used by Aero.”

Recall NG Eagle had reached an advanced stage in the procurement of their AOC, getting to the point of demonstration flights and had annexed some Boeing 737NG from Arik Air before petitions were written to stall, maybe end the process.

Nigerianflightdeck is an online news and magazine platform reporting business stories with a bias for aviation and travel. It is borne out of the intention to inform, educate as well as alter perceptions with balanced reportage.
Previous Consequences of unremitted funds visible as Nigerians pay triple fares on foreign airlines
Next Terrorists have time, finances, Dr. Demuren reveals; calls for increased security funding