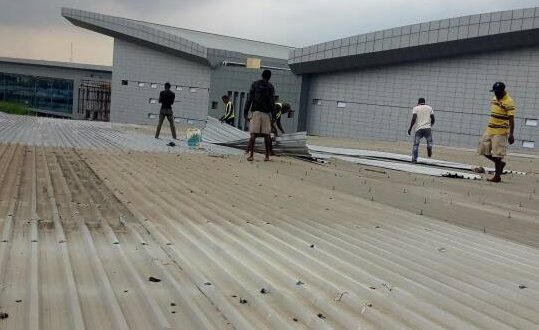 Replacement of roof members at MMIA

THE Federal Airports Authority of Nigeria (FAAN) this morning explained that heavy rains and subsequent windstorms disrupted its civil engineers from carrying out replacements of the old roof of the Murtala Muhammed International Airport (MMIA) which led to leakages while it was raining.

At the weekend there was a video making rounds on some sections of the social media on a leaking roof at the Murtala Muhammad International Airport (MMIA), as part of “the deplorable condition of facilities” at the Airport which FAAN debunked explaining that nothing could be further from the truth.

FAAN in a brief explanation by Ag General Manager Corporate Affairs, Mrs Henrietta Yakubu explained that the leakages were was due to the fact that work was ongoing on the roof by civil engineers who were replacing the old roof with new ones before heavy rains accompanied by wind storms interrupted of which the workers for their safety could not continue to work until the rains and thunderstorms subsided.

A statement following that explanation further read, “it is regrettable that the story, which was capable of creating fear in the mind of intending passengers, was not based on assessment of the said facility. This is more so because the facts could have easily been cross-checked with our Corporate Affairs Department before going public with such a sensitive issue.”

“Management wishes to put the records straight, that the licking roof was a result of the on-going works at the MMIA, Lagos. This upgrade is coming at the heels of the Executive Order issued recently by the Presidency aimed at “Ease of Doing Business in Nigeria”, and the Authority is doing everything possible to improve the quality of her services in line with the Order.”

“Management in compliance with government policies has since initiated practical steps to improve on safety and security architecture of the nation’s premier airport and also improve comfort and passengers experience.”

“Consequently, upgrade of facilities is on-going in different areas at the International Terminal building of MMIA Lagos and as a result we are experiencing challenges as we have to keep up with our core operations going on while the upgrade continues.”

“Sequel to this on-going works, we recently experienced some leakages from the roof at the “D Wing” of the Terminal of Murtala Muhammed International Airport, Lagos, owing to a heavy rain accompanied by wind storm. This is directly connected to the civil engineering works going on at the roof top at that location, which temporarily interrupted our engineers who are replacing the old roof members with new ones at that instance.”

“It was practically impossible to work at that location due to its altitude and slipperiness while the rains lasted, but work immediately resumed after the rain subsided, and the integrity of roof was restored.”

“We want to state clearly that this defect did not affect operations in any way or at any time at the Terminal. FAAN assures passengers, airport users and the general public of her commitment to a safe, secure and improved facilitation at the nation’s airports.”

Nigerianflightdeck is an online news and magazine platform reporting business stories with a bias for aviation and travel. It is borne out of the intention to inform, educate as well as alter perceptions with balanced reportage.
Previous Spain deports 23 Nigerians for various offences
Next BA slashes fares for First Class Summer travellers