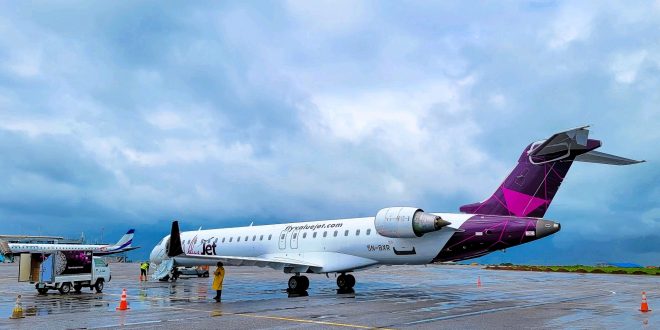 Share
ValueJet has announced that it has opened its booking portal and will start flight operations from Monday, October 10, 2022 with flights to Abuja, Port Harcourt, Asaba and Jos daily and plans to increase routes and frequency when its fourth and fifth aircraft arrive.

The airline made this known during its launch party emphasising that it would be a hybrid carrier offering both low-cost and legacy option to ensure that ‘everyone can fly’.

Chairman of ValueJet, Kunle Soname who gave the opening remark at the event said that the airline was no stranger to the industry and would base it’s services on the need for right pricing. READ ALSO: ValueJet gets AOC set to commence operations soon

Soname said,”ValueJet is hardly a stranger in the industry, and all operational insights from previous partnerships have been applied in building our business plan and propositions. We have identified a niche in the sector, the need for fair pricing amidst the rising cost of commercial aviation to the average customer compounded by tough economic realities for air operators.

” Tough times are for us to get tougher, he said,”and not use current climate as a negative block but rather an energising springboard

He talked about the airline’s fleet stating that it consists of CRJ 900 and stressed that with time, they would expand.

“Our fleet of modern and efficient CRJ 900 aircraft is ready, we can boast of a resolute professional workforce which is among the best in the industry to deliver end-to-end customer experience backed by modern technology.

“With a long-term vision and growth mindset, we have set our sights in the coming years to expand beyond the Nigerian airspace. We are in a privileged position despite existing economic headwinds. We are building a cost-conscious business with an understanding of the sector and how Nigeria is poised to play a key role in developing Africa’s aviation by joining the rest of the global players in regional and international markets.

Highlights of the event was the unveiling of the airline’s different array cabin crew uniforms with the airline Chairman and his wife presenting the crew members their wings.

Nigerianflightdeck is an online news and magazine platform reporting business stories with a bias for aviation and travel. It is borne out of the intention to inform, educate as well as alter perceptions with balanced reportage.
Previous Ethiopia bans Nigerians from obtaining Visas on Arrival after 49% stake acquisition on Nigeria Air
Next Arik Air gives discounts on 8th Affinity Wings anniversary