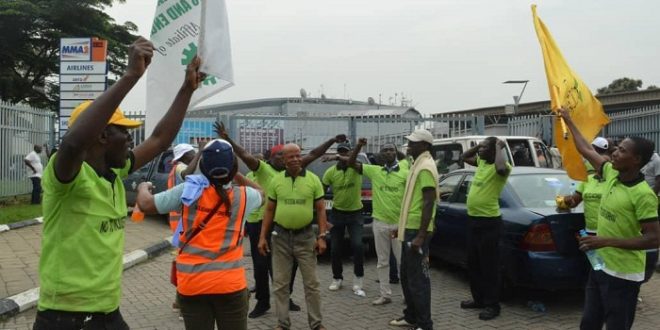 BASL from what was gathered acceded to the demands of the three unions that shutdown their operations as both parties has reportedly signed the agreement that snowballed into the current picketing.

In a letter signed by the Group Executive Director, Roger a whittle and Group Head a Human Resources, Ola Azeez, addressed to the unions titled: Re:15-Day Ultimatum to Recall and Reinstate Workers the management of Bi-Courtney agreed to the unions’ demands as follows:

“Staff of BASL are free ( as they have always been) to exercise their right of association by indicating their willingness to join any of the aviation unions. The management shall deduct and remit check off dues as required below.”

“The 27 members of the union who were laid off shall be recalled without loss of pay or service and deployed to where their services are required within the ResortGroup. Thereafter the company intends to declare them redundant and is willing to discuss their redundancy benefits with the unions in accordance with the Section 20 of the Labour Act”

According to the unions, until the 20 sacked workers of BASL were reinstated the industrial action will continue indefinitely.

The workers were sacked in February for indicating interest to fe part of one Union or another and this did not go down well with labour as they took the matter up negotiating to get them recalled.

Before the agreement was reached it was learnt that airlines operating from MMA2 to various destinations in the country include Dana, Aero, Arik, Med-View, Azman, Max Air had lost over N300million in revenue.

One of the airlines’ officials, who craved for anonymity, said: “For now, we have lost over N63million to the ongoing industrial action and losing such money in an industry where airlines are still grappling with a myriad of challenges is unacceptable and disappointing to say the least. We do not know how the situation will be in the coming days and we might have no other option than to downsize, if the action stretches for too long.”

However, with the agreement reached, the airlines that relocated would move back to their base and recommence services from there.

However, despite the late restraining order suit number FHC/L/CS/16412/18 obtained by Bi-Courtney Aviation the unions embarked on the industrial action crippling the terminal operators services.

Nigerianflightdeck has also learnt that an Interministerial committee is to be set up to look into unionism among private Organisation in the sector.

Nigerianflightdeck is an online news and magazine platform reporting business stories with a bias for aviation and travel. It is borne out of the intention to inform, educate as well as alter perceptions with balanced reportage.
Previous Dana Air records over N100m loss, threatens to downsize if MMA2/ Unions’ dispute linger
Next Dana Air resumes flights at MMA2, introduces Cash Top-up for Guests