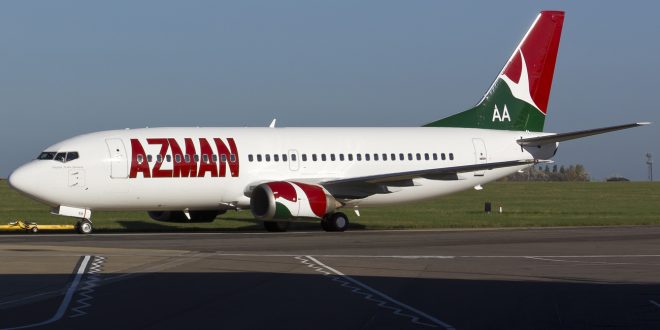 IN what could be described from something out of a James Bond movie, an intruder was this morning seen on top of the engine of an aircraft belonging to Azman Air that was waiting for clearance with passengers headed to Port Harcourt.

A video of the incident which seems to have gone viral shows the yet to be identified man on the aircraft wing with passengers screaming in alarm before Aviation Security (AVSEC) personnel from the Federal Airports Authority of Nigeria (FAAN) apprehended the intruder.

Reacting with more details, FAAN in a statement said,”At about 1009 hours, aviation security officials of the Federal Airports Authority of Nigeria arrested an intruder who was sighted trying to climb into an Azman aircraft waiting for clearance from Air Traffic Controllers.

“The pilot of the Azman aircraft with registration number 5N-HAI departing Lagos to Port Harcourt reported the incident and Avsec officials swiftly responded. The man has been apprehended and is now in Avsec’s custody.

“The aircraft taxied back to the apron for a thorough check and has departed for Port Harcourt afterwards.

“The Authority is already investigating the incident.

Nigerianflightdeck is an online news and magazine platform reporting business stories with a bias for aviation and travel. It is borne out of the intention to inform, educate as well as alter perceptions with balanced reportage.
Previous Air Peace airlifts Bronze-winning Super Eagles back to Nigeria commends team’s die-hard spirit
Next Security Breach : FAAN suspends AVSEC personnel, Unit heads on duty