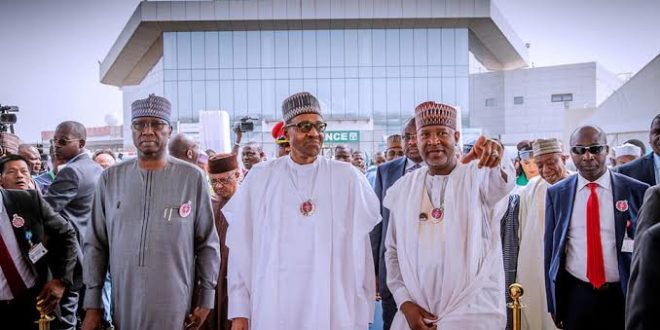 MINISTER of State (Aviation), Sen. Hadi Sirika has described as unprecedented, achievements under President Muhammed Buhari stating that the four years of the current administration has seen an improvement in safety and infrastructural development as well as the part payment of Ex-staff of the now liquidated Nigeria Airways.

The Minister also stated that under this administration, the Accident Investigation Bureau (AIB) have become more robust and has not only cleared a lot of pending investigations that were there since inception in 2007 but has issued safety recommendation that has guided the industry and aided in its zero accident achievement.

Sirika while speaking to reporters on airport development, said President Buhari has commissioned the Port Harcourt International Airport, Omagwa and the Nnamdi Azikiwe International Airport, Abuja and passenger facilitation has since commenced at these airports stating that he ensured the projects were not abandoned and discarded.

He also said that President Buhari in 2017 approved and ensured the reconstruction of Abuja runway and undertook isolated repair of the taxiway and apron, including complete remarking of the entire pavement and associated airfield lighting system.

His words,” President Buhari has commissioned the Port Harcourt International Airport, Omagwa and the Nnamdi Azikiwe International Airport, Abuja and passenger facilitation has since commenced at these airports. This administration met the projects on ground, but Mr. President ensured that they were not abandoned. At present, Kano and Enugu airports are at advanced stages of completion.”

“We reconstructed Abuja runway and undertook isolated repair of the taxiway and apron, including complete remarking of the entire pavement and associated airfield lighting system.”

Speaking on safety and the achievements of the AIB, Sirika noted that the investigators have published 10 final reports on serious incidents out of 28 released since the creation of AIB in 2007 and that it has Issued 39 safety recommendations to improve safety.

Sirika said,”AIB has published 10 final reports on serious incidents out of 28 released since the creation of AIB in 2007. This indicates 36 per cent of total reports released by the bureau since it was established in 2006. It has even Issued 39 safety recommendations out of a total of 121 issued by the agency. Again, this represents 32 per cent of total safety recommendations ever released by the agency. This administration has also rehabilitated the Emergency Operating Centre and furnished the Resuscitation Centres at Abuja and Lagos Airports, respectively.”

On the expedience used to provide the preliminary report of the Helicopter crash involving Vice President Yemi Osinbajo he said:

“You will recalled that Vice President Yemi Osinbajo and 11 others were involved in a helicopter crash managed by Caverton Helicopter in Kabba, Kogi State and few hours after the accident, Accident Investigation Bureau (AIB) vowed that it would publish the preliminary report in few days. True to its word, in less than two weeks, AIB came out with the preliminary report on the accident and this singular action received applauds from all stakeholders including Aviation Round Table (ART).”

“Gone are the days when we would wait endlessly to know what happened in aircraft accidents and incidents; the bureau is adequately funded to investigate any major incident or accident and it recently signed a Memorandum of Understanding (MoU) with the Sao Tome and Principle. It has also gone beyond the shores of Nigeria to investigate major incidents, which happened in other country.”

Nigerianflightdeck is an online news and magazine platform reporting business stories with a bias for aviation and travel. It is borne out of the intention to inform, educate as well as alter perceptions with balanced reportage.
Previous NCAA charges Telecoms operators to offset hundreds of millions in accumulated debt
Next Major industry achievements include timely accident investigation release- Sirika