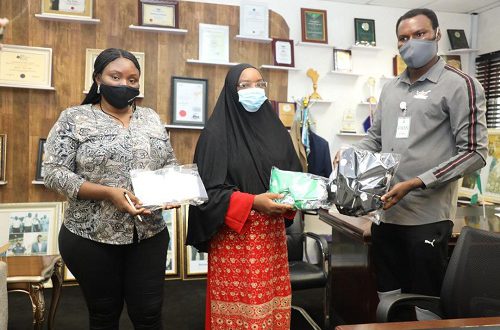 A 3-man team of the Standard Organizations of Nigeria (SON) inspected the 7 Star hangar facility at the Murtala Mohammed Airport Ikeja, where the company says it has invested over N100m so far on machines to aid them produce nose mask.

Speaking shortly after an inspection visit by the team, the Managing director 7-Star Global Hangar, Engr Isaac Balami said the team was at the Hangar to ascertain the level of their compliance to the Approved guidelines of their nose masks Production.

He said that the team was pleased with what they saw on ground after the inspection and gave the company guidelines for the production of the nose masks stating they have met all standards in the production especially with its 100, 000 daily production.

Balami also said the 7-Star will soon start printing instructions on the usage of masks and country of production as recommended by SON while it planned to commence the production of polo T-shirts and airline crew uniforms with its over 500 sewing machines.

According to him,  the company was fully prepared for the commencement of flight to meet airlines demand after the coronavirus pandemic shut down with the provisions of seat covers and aircraft maintenance.

Nigerianflightdeck is an online news and magazine platform reporting business stories with a bias for aviation and travel. It is borne out of the intention to inform, educate as well as alter perceptions with balanced reportage.
Previous UK Government announces three more charter flights for British travellers from Nigeria
Next Elumelu to moderate Africa’s Post-Covid Economic Recovery at UBA Africa Day Conversations 2020