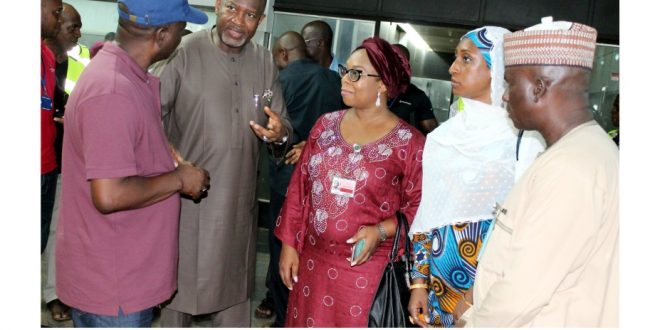 MINISTER of State (Aviation), Hadi Sirika has explained that the vibrations experienced at the Murtala Muhammed International Airport (MMIA) was not in any way a structural issue at the foremost airport but as a result of the unlatched doors where the coolers which have just been put into use are housed.

Minister who flew in from Abuja  to inspect the situation firsthand, described the rumours as erroneous  and misleading explaining that the reason for the massive vibrations at the airport was because doors were not well-latched and the vibrations happening were directly under the office Royal Air Maroc and that led to the wrong assumption that something was wrong.

Explaining the issues surrounding the vibes Sirika said, “Well first and foremost it is wrong and erroneous that the structure of the Murtala Muhammed Airport is failing and there was earthquake as reported by some sections of the media, it is not so. What happened is that there was vibrations at the air handling room of the cooling system, this  is a huge metal door that needs to be locked properly it was locked but it wasn’t latched properly, the latches were not in place and that gave rise to the vibration because there are moving parts, there are motors and fans and other things that are activated and they function the motion to create the necessary cooling system. That door responded to the vibration and because it wasn’t latched, it was vibrating and that vibration was directly under the counter of Royal Air Maroc and they assumed the structure was vibrating to the point of collapse.”

“Once our men were alerted, they went promptly, identified the problem which was the door, and latched the door and since then there has been quiet, so it’s not true.”

The minister further disclosed that the engineering department was working on the chillers too stating,” We are working on those chillers and in no distant time the airport will be quite chilled and comfortable for our passengers.”

On the issue of the power outage that was reported, Sirika said there was power outage but there were redundancies that are dedicated to certain critical areas of the airport.

“The terminal building where passengers found themselves were affected but the outage did not get to the critical safety operations of the airport and even that it took us a couple of minutes to identify the problem and we went for it, the generators that would power that unit had surges and destroyed part of the activation system of the generators and took time to restore but it has been restored now and since then everything is working normally.”

‘ Things like this there are unforeseen, power surges are things we cannot predict but we check that and prevent the surge from affecting us but it depends on the surge. Going forward, government is working hard to provide other alternate sources that would be able in the future , even when there is surge not outages passengers will not notice and the airports will function normally.”

Nigerianflightdeck is an online news and magazine platform reporting business stories with a bias for aviation and travel. It is borne out of the intention to inform, educate as well as alter perceptions with balanced reportage.
Previous TSC/CSC remittance: ATSSSAN reveals how domestic airlines defraud Federal Government
Next CBN auctions $418m to agriculture, airlines, petroleum sectors